Shield of the Legion

Though blued and hardened, there is a subtle reflection on the reverse of this shield. While it may be raised against the world, the bearer can't escape his own visage and what is owed.

Shield of the Legion is a targe shield in Dragon Age: Origins.

In the Dragon Age (tabletop RPG), The Shield of the Legion is available as a "permanent magic item" reward for player characters. The shield is one of the most powerful armor items available in the game.[1]

“These shields are awarded to distinguished officers of the Legion of the Dead, the dwarven military force dedicated to driving the darkspawn out of the Deep Roads. Faced with overwhelming odds, the Legion grimly accepts its duty, no matter the cost.” 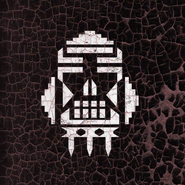 Armor of the Legion

Gloves of the Legion

Boots of the Legion

Helm of the Legion

Retrieved from "https://dragonage.fandom.com/wiki/Shield_of_the_Legion_(Origins)?oldid=875354"
Community content is available under CC-BY-SA unless otherwise noted.