Shayd is a human rogue mercenary hired by Sutherland to join his company.

Shayd joins Sutherland and Company following the completion of A Patrol for the Crew. She will appear on the second floor of the Herald's Rest tavern in Skyhold, behind Sutherland.

Callback
Shayd, now known as Ser Shayd, Lady of Evesol, accompanies Sutherland to Skyhold to investigate the loss of contact with its caretakers and a missing supply caravan. Inside the rotunda, they are confronted by a Regret demon that took shape from the plaster of Solas' murals to the Inquisitor. When the demon uses regret to briefly neutralize her, Shayd thinks back to when she was fourteen, running through an alley in Dales End. She thinks back to the cruel words she spoke, though doesn't reveal what those were.

Shayd is freed from the demon's influence when Dagna throws a jar of bees at it. She later participates in the fight that successfully sends the demon back to the Fade.

A Test of Mettle and the Crew (Part IV) (war table) 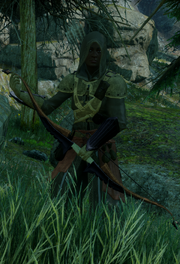 Shayd equipped in the medium armour 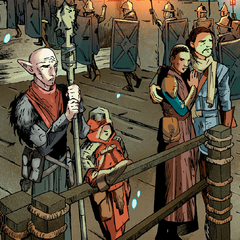 Shayd in Dragon Age: Magekiller
Add a photo to this gallery

Retrieved from "https://dragonage.fandom.com/wiki/Shayd?oldid=890814"
Community content is available under CC-BY-SA unless otherwise noted.