The Shattered Library, or Vir Dirthara, are ruins of an ancient elven library, suspended between the waking world and the Fade.

Vir Dirthara was made with material world and Fade, and at least some of its visitors either took or created "forms out of air". It was the living knowledge of the elven empire that comprised libraries of every city and wisdom of every court. Vir Dirthara was a connecting place[1] and the spirit elvhen called "Ghil-Dirthalen" was connection. One city could read the records of another and one of the People feel the memories of another.[2]

When Fen'Harel "held back the sky", the Veil he created weakened magic and without it elven cities and structures crumbled.[3] Vir Dirthara was one of the countless elven marvels that were intrinsically tied to the Fade and dependent on its presence, and the Veil destroyed them all.[4] Paths of Vir Dirthara broke and knowledge was fractured. Many were trapped and their last words were that the floor was gone and they were falling down.[1] Others lived and called to their gods who would not answer,[5] while yet others vowed revenge against the treacherous Wolf.[3] The Archivist recorded the end of all they knew.[2]

In their search for Viddasala, the Inquisitor enters the eluvian in the Crossroads marked by a bookshelf and finds themselves in a half-ruined library with scattered books, elven statues and murals amid rubble. Huge fragments of masonry form islands floating in the air and interconnected with eluvians.

At the Entrance the Inquisitor encounters the Archivist, a spirit of wisdom that once "knew all". It tells that Viddasala's scholars and mages search the library for information about the Veil. The Archivist advises to find "another one of itself" to learn more. As a final warning, it mentions that an unknown person recently woke the Librarians, spirits who once facilitated learning but now present a threat.

Moving forward, the Inquisitor discovers a qunari camp overhead, on an "island" that is turned upside down. The eluvian which appears to lead to the Inverted Ward is nearby, but the path to it is broken. The Inquisitor has to search for three mysterious red items and interact with them to recreate the path.

As the Inquisitor explores nearby islands, they meet two more instances of the Archivist. The group has to fight waves of the qunari, whose corpses and research notes pertaining to magic lay around. There is not a mark on the victims but they seem to have died in terror. The Anchor Blast upgrade for the Anchor Discharge becomes available in the Courtyard after finding the second red item. After discovering the last item, the Inquisitor is attacked by spiritual Librarians and Fearlings.

As the Inquisitor walks the reconstructed path, they face Viddasala in the Inverted Ward. She explains that the qunari view the inability to curb magic as the reason of the chaos in the South. When they saw the Breach, they decided to step in and remove the leaders while converting the rest of the populace to the Qun, a plan called "Dragon's Breath". Before she departs, Viddasala mentions the agent of Fen'Harel who has disturbed their plans. The Inquisitor is left to repel the attack of her men and search the area for evidence of their activities.

Notes laying around reveal that the qunari employed elves passing as servants to infiltrate the palace and used saarebas to research strengthening the Veil. The last Archivist tells that Viddasala went to the Darvaarad and that the eluvian leading there is protected by the keystone the Inquisitor found with one of the qunari as well as a password that the spirit overheard: "maraas nehraa".

Codex entry: The Very Private Diary of Sandal Feddic, DO NOT READ!!!!

Codex entry: Vir Dirthara: Exile of the Forbidden Ones

Note: While the female statue is assumed to be a qunari given its horns, it should be mentioned that the model also largely resembles that of most Desire Demons. 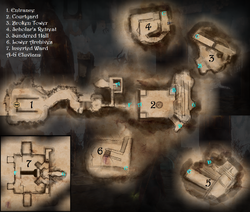 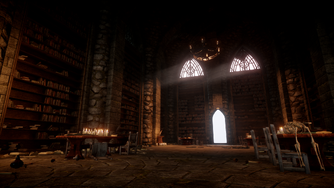 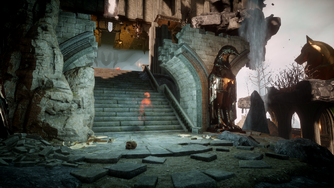 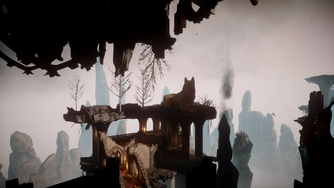 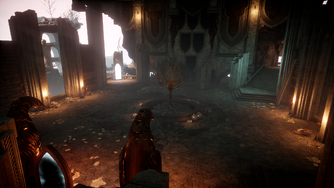 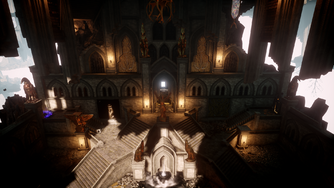 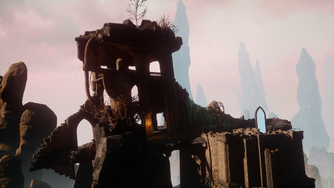 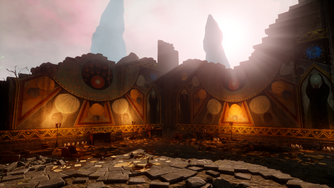 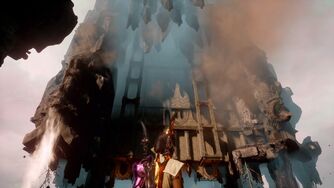 Two Upside-Down Statues on Either Side of the Inverted Ward 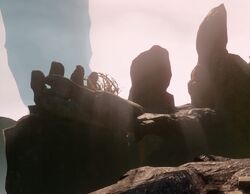 Stone Hand
Add a photo to this gallery

Retrieved from "https://dragonage.fandom.com/wiki/Shattered_Library?oldid=879907"
Community content is available under CC-BY-SA unless otherwise noted.