Edit
watch 02:05
Wiki Targeted (Games)
Do you like this video?
Play Sound
“It was my dream for the People to have a home of their own, where we would have no masters but ourselves. The enemy of my enemy is my friend, and thus we followed Andraste, against the Imperium. But she was betrayed, and so were we.”

Shartan, also known as The Liberator,[1] was the leader of the elven slaves who joined Andraste's Exalted March Against the Tevinter Imperium in -171 Ancient.[2]

At Shartan's word, the sky
Grew black with arrows.
At Our Lady's, ten thousand swords
Rang from their sheaths,
A great hymn rose over Valarian Fields gladly proclaiming:
Those who had been slaves were now free.

Shartan was born into captivity, but dreamed of a homeland where the elves could once again be free and encouraged his fellow elven slaves to rise up against their Tevinter masters. Apparently, his followers stole whatever they could find to make weapons and fought with harvesting tools, knives of sharpened stone and glass, and with bows made from broken barrels or firewood.[3]

Under Shartan's leadership the elves successfully ambushed and overwhelmed Tevinter forces, bringing them to the notice of Andraste's army. Shartan and Andraste negotiated an alliance of equals and together joined forces at Valerian Fields to fight the Tevinter army. After the battle was over, Andraste named Shartan her Champion and gave to him her mother's sword,[4] which he renamed Glandivalis.[5]

After Andraste was betrayed and captured, Shartan and a hundred elves charged the pyre she had been tied to in an attempt to free her, but were all killed by a hail of arrows before they could get to her.[1]

The support he and the other elven slaves rendered to the first Exalted March was not in vain, however. In -165 Ancient, the elves were rewarded by Maferath with the creation of a new homeland in the Dales.[6] The migration to the promised land in the southern Thedas was called "The Long Walk" and many elves perished along the way, including Shartan himself.[7]

The Chant of Light originally included a canticle describing Shartan's contribution to Andraste's cause, but it was removed from the Chant after the Exalted March on the Dales and is now considered heretical; his involvement is now referred to as the "Heresy of Shartan."[8] The "New Cumberland Chant of Light" does, however, include these passages.[9]

Following the Exalted March against the Dales, all Chantry art including elves was destroyed. The only exception was a mural by Henri de Lydes featuring Shartan, Andraste, and her disciples. However, Shartan's ears were docked. A faithful reproduction of the mural exists at the University of Orlais.[10]

If the Warden is an elf they can ask two chantry sisters who stand outside Denerim's chantry about elves in the Chant, and sisters will tell about the Canticle of Shartan and that Shartan himself was burned at a stake beside Andraste.

Leliana will speak a little about Shartan if asked if she knows any stories about the Dalish, explaining that he was born into captivity and died when Andraste was betrayed.

Furthermore Shartan is one of the eight spirits the the Warden encounters in the Gauntlet during the quest A Test of Faith. He will appear as a shade and disclose to the Warden of his desire for an elven homeland. In order to advance the quest the Warden will need to answer the following riddle proposed:

"I'd neither a guest nor a trespasser be. In this place I belong, that belongs also to me."

Hawke can find a book written by Shartan which can be gifted to Fenris, one of the Champion's possible companions. Hawke can also loot the sword Glandivalis that once belonged to Shartan from the pride demon Hybris. Interestingly, Hybris says that he has "fragments of every fool who held a throne, here or in the black."

Empress Celene travels to the University of Orlais to discuss the acceptance of common and elven students. There she and her champion Ser Michel de Chevin note the reproduction mural of Shartan in its courtyard. Later, a human female actress portrays Shartan's involvement in Andraste's rebellion by way of a play aimed to critique Celene's position on the elves of Orlais.

If the Inquisitor is an elf, Mother Giselle mentions Shartan’s support to Andraste when conversed with.

If Leliana is made Divine, she re-canonizes the Canticle of Shartan, a move that divides Andrastians deeply.[11]

This section contains spoilers for:
Trespasser.
These folktales were likely inspired by the real rebellion against tyrannical Evanuris led by the trickster, Dread Wolf.

The Book of Shartan 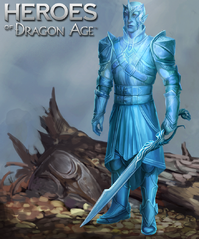 Artwork of Shartan from Heroes of Dragon Age

Artwork of Shartan's tier progression in Heroes of Dragon Age