Shale is a potential party companion who can be recruited from the town of Honnleath. Shale's character (and associated quests) have been the subject of much discussion; originally intended to be a joinable NPC in the shipped game, Shale was cut by developers who wanted to concentrate on further polishing the game prior to release in 2008. When the game release date was pushed back to Q4 2009, developers spent time re-integrating Shale back into the game. Although still not included in the shipped version of the game, Shale is available as free Day One DLC to all purchasers of either the Standard or Collector's Edition of Dragon Age: Origins who download "The Stone Prisoner". For those who obtain a second-hand copy of the game, "The Stone Prisoner" is available for purchase for US$15.

Shale does not use the usual armor and weapons, but, much like Dog, has specialized equipment in the form of crystals. Shale may equip Small Crystals (classified as weapons in the inventory) that grant an bonus to attack damage, as well as converting all damage to that type, and Large Crystals (classified as armor in the inventory) that can grant a defensive bonus and resistance to certain types of damage. 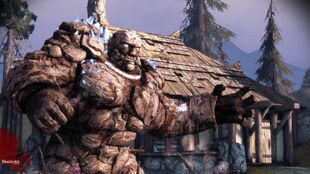 Shale is one of the last dwarven war golems. The knowledge to create such golems was presumably lost after the invasion of the darkspawn and the sealing of the Deep Roads. Shale is extremely proud of being a golem and hates the villagers of the town of Honnleath; citing the expression that "familiarity breeds contempt", and that after 30 years of watching them, Shale has become very familiar with them. Shale's hatred of the town folk may also come from their habit of dressing the golem up in festive garb during holidays or the fact that they spread bird seed around the golem's inert body which brought near Shale's most dreadfully hated enemies, the birds.

This section contains spoilers for:
{{{context}}}.

If Shale is a party member when the Warden arrives at the Anvil of the Void it is revealed that Shale was once a female dwarf known as Shayle and she belonged to the House of Cadash. She was one of the first volunteers to become a golem. After becoming a golem, she stayed with Caridin until she was sent away out of mercy. More information is also available through Shale's personal quest.

Also, if Shale is in your active party when you reach Orzammar, it will regularly participate in intimidation efforts by adding that it will squish or pop heads. It will also engage in a conversation with the Shaperate, located in the diamond quarter. Note: Shale cannot accompany you into the Arl of Denerim's Estate to rescue Queen Anora. If you have her in your party, Queen Anora's hand maiden will tell Shale that she cannot go. You will then get the party selection screen and be forced to select another party member to accompany you.

One way to get Shale's personal quest, is to have her in the party during the culmination of A Paragon of Her Kind. If Shale is not in the party when the Warden speaks with Branka and Caridin or if Shale was collected after A Paragon of Her Kind quest is completed, simply speak to Shale at the party Camp. She will ask the Warden if Caridin was encountered and will follow with a few questions about Caridin. If the Warden sided with Caridin, respond honestly to her questions and she will thank you and give the quest. If the Warden sided with Branka while Shale wasn't in the party, the quest still can be taken later in the Camp through consequent lying to Shale with high Coercion Skill. Return to Caridin's Cross in the Deep Roads and Shale will automatically make a comment about how the area is familiar and she remembers a Thaig nearby. Agree to see the Thaig and it will be available on the Deep Roads map as Cadash Thaig.

This quest consists of taking Shale back to her home Thaig, called Cadash Thaig to find proof that she was once a dwarf. If this quest is completed, Shale's approval can increase by +23 or more points. Along the way you will have to fight several hordes of Darkspawn. You will also find a few large and small 'Brilliant' crystals to make use of on the trip to your final destination of the Golem Monument (marked as a quest location), and a conversation with Shale that ends the quest. If she was not with you when you met Caridin she will comment that she wishes she would have had the chance to speak with him.

Note: If the main character decides to side with Branka for the final part of A Paragon of Her Kind, Shale will side with the golems and attack the main character. She becomes hostile and must be killed, and does not reappear later in the game, effectively losing the ability for her use for the remainder of the game.
Note: In order to get the 'Brilliant' crystals, Shale must be at least level 16[confirmation needed] .

Shale serves dual purposes: the party’s main tank or a heavy melee damage-dealer. If the Warden wants Shale to act as the main tank, concentrate on the Stoneheart chain first. Stoneheart activates Shale’s defensive talents and increases the golem’s threat. Stone Roar gains a health regeneration bonus for Shale and attracts the attention of a single targeted enemy, who will veer toward Shale immediately and has a chance to stun nearby enemies if they fail a mental resistance check. Regenerating Burst damages and possibly stuns nearby enemies, plus it increases stamina regeneration and threat generation. 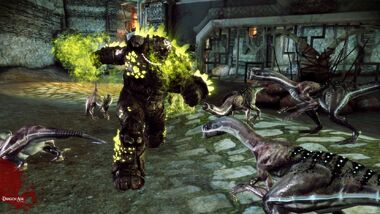 If the Warden wants Shale to act as the main damage oriented character, first concentrate on the golem’s Pulverizing Blows chain. It activates Shale’s offensive talents, which gives a bonus to damage with a penalty to defense. Slam swings at a nearby enemy and, if it connects, automatically generates a critical hit and knocks the target back. Quake hits nearby enemies with an AoE that damages and knocks them back. Killing Blow smashes a target with a critical hit (for successful connects) and extra damage equal to Shale’s remaining stamina, which drains away after the blow.

Rock Mastery supports damage orientation and gives Shale more ranged options and it activates the golem’s ranged talents and gains a large bonus against incoming ranged attacks, but with a penalty to armor, defense, and melee critical chance. Nearby party members also gain bonuses to ranged critical chance and ranged attack speed. Hurl Rock throws a stone projectile at a targeted area and all enemies near the point of impact take physical damage and may be knocked down. Earthen Grasp immobilizes enemies unless they pass a physical resistance check. Rock Barrage throws multiple rocks into the air, which rain down on a targeted area and inflict movement penalties and knock down anyone within if they fail a physical resistance check.

Shale can serve four different roles through her talents. Each has a set of four talents (one sustained plus three related active or passive) designed around a role. The three related talents become accessible in combat if the corresponding Sustained Talent is activated. In addition, learning any of the three related talents increases the power of the sustained talent. In addition to unique talents, Shale has access to Warrior Talents. Shale does not have access any of the skills the other characters have nor can she specialize in any of the Warrior specializations. The four roles, and information/tips on each are:

As you befriend Shale and gain her approval she will gain additional skills, including the following:

Retrieved from "https://dragonage.fandom.com/wiki/Shale?oldid=59574"
Community content is available under CC-BY-SA unless otherwise noted.