“The darkspawn are an evil that must be destroyed, it's true. Though not as evil as the birds... damnable feathered fiends!”

Shale is a stone golem and potential companion in Dragon Age: Origins. It can be recruited from the town of Honnleath through The Stone Prisoner DLC.

Shale is one of the war golems created by Paragon Caridin in -255 Ancient to defend the dwarven thaigs against the darkspawn during the First Blight. As such, it has been a golem for more than a thousand years. Shale was a part, for a time, of the Legion of Steel: a dwarven army regiment that was composed completely by golems and it was the only female volunteer to join this regiment.[1] However, Shale seems able to accurately remember only the events of approximately the last 30 years, and its knowledge of what it did prior to that is mainly based on what it has heard from others.

According to Caridin, Shale was the best warrior of King Valtor and member of House Cadash. As a golem, Shale was very loyal to Caridin, even standing with him as he objected to Valtor's use of the Anvil of the Void. But, after Caridin was turned into a golem, he sent Shale away, "out of mercy". Sometime after leaving Caridin, Shale became deactivated in one of the lost thaigs.

Eventually, in 8:93 Blessed, a deactivated Shale and its control rod were found by Wilhelm Sulzbacher, a mage who was trying to escape from shrieks in the Deep Roads.[1] Wilhelm reactivated the golem and, for many years, used it to his own ends: Shale became an object of study, a trophy, and a weapon during the Fereldan Rebellion, for both Moira Theirin's and later Maric Theirin's rebel forces.

After the war, Wilhelm settled in the village of Honnleath, taking Shale with him and continuing his study of the golem. While under Wilhelm's control, Shale was experimented on, paraded around the village like a pet, and even chiseled down to a smaller size so that it might more easily fit through the doorways in Wilhelm’s home.[1]

Before Wilhelm's death, Wilhelm speculated that the Desire demon he had trapped in his laboratory was having an influence over Shale; although he also considers that his own experiments on Shale may have also been a factor. Wilhelm had planned to temporarily deactivate Shale while he attempted to banish his imprisoned demon.[2]

Wilhelm was found dead outside his tower in 9:04 Dragon, with a deactivated Shale standing frozen over his body. Though there were no witnesses to the event, Shale was believed to have killed him. In response to the mage's seeming death at the golem's hands, Shale's control rod was sold to a merchant by Wilhelm's wife, in the hopes that Shale would never be activated again.

But, though it was deactivated, the golem was still aware of its surroundings. Shale remained that way for decades, awake but unable to move.

Shale is seen under the control of Wilhelm when Maric and Loghain meet the main rebel camp. Shale is also encountered when the party returns to Gwaren.

After the Warden encounters a merchant called Felix de Grosbois at Sulcher's Pass, they obtain the control rod to a Golem located in the village of Honnleath. After rescuing several trapped villagers including Matthias, Wilhelm's son, The Warden re-activated Shale and convinced it to join in their fight against the Fifth Blight.

During the mission to rescue the Paragon Branka, the Warden will encounter Caridin. If Shale is present at the time, Caridin will reveal much of Shale's past and trigger the quest A Golem's Memories. If the Warden sides with Branka they will be forced to kill Shale as well. Alternatively if they side with Branka and Shale is not present, a conversation in camp will trigger where the Warden can simply say they do not know what happens to Caridin and then the next time Shale is brought into the Deep Roads the quest will activate.

Shale will remember it was found in Cadash Thaig where the party will discover a registry of dwarves who volunteered to become Golems in order to fight the darkspawn. The list includes Shale's original identity: Shayle, a female warrior of House Cadash.

The plot follows BioWare's own canon, meaning it may not follow some of the player's choices in the games.
Shale is accompanying Wynne to an abandoned Grey Warden outpost in the Western Approach where Pharamond, a Tranquil researcher and personal friend of Wynne's, is investigating the nature of the Rite of Tranquility. According to Wynne, Pharamond's research might give insight into how to return Shale to its original female dwarven form. When Shale and Wynne arrive at the outpost, they find it overrun by demon-possessed corpses. As Wynne leaves to find help in Val Royeaux, Shale stays behind to ensure nothing escapes the outpost. After confronting the abomination, Shale was to stand watch while the others entered the Fade, but was drawn through the Veil with them. After rescuing Pharamond, Shale goes to the Circle of Magi in Montsimmard so the information about the Rite of Tranquility could be disseminated among the circles quickly. Later Shale joins Evangeline and Wynne in their raid on the White Spire and destroys the phylacteries stored there. Shale is also present at a gathering at Wynne's resting place, her ashes being buried beside an old oak tree.

Shale has a preference for "remarkable" gemstones. There is an issue with the Xbox 360 and PS3 versions which causes Shale to not give the standard +10 for the first gem; instead you receive +5, which decreases as usual, so that after receiving four of the gems, Shale seems uninterested in the others ("So I'm to keep this then, am I? Fine."), giving only +1 for the rest, giving a measly 18 approval for giving them all to Shale. Therefore, you have to rely on conversation and your actions to get higher approval.

If you have the Feastday Gifts and Pranks DLC, however, you might also compensate for this bug with the thoughtful gifts and sugar cakes available from Bodahn Feddic. No matter how many are given, a Thoughtful Gift is always worth

Shale does not use conventional weapons or armor. Instead, much like Dog, the golem has two slots for specialized equipment:

There are a total of 50 different crystals: 25 small crystals, 25 large crystals. Both sizes of crystals come in each of the five elemental types and in five varying degrees of quality.

Equipping Shale with a small and large crystal of the same elemental type will grant an additional set bonus of +10% to the corresponding resistance.

As you befriend Shale and gain its approval, it will gain the following additional skills:

Codex entry: A Note from the Honnleath Village Council 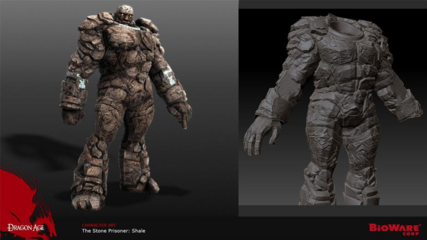 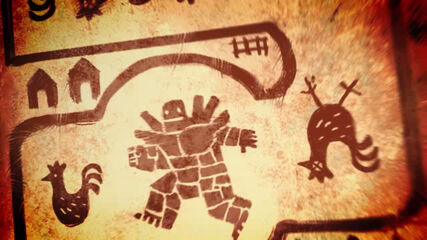 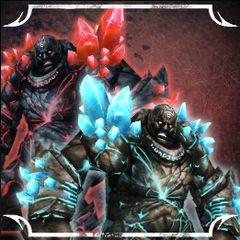 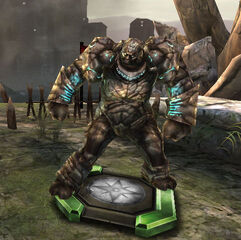 Tier progression of Ruby Shale in Heroes of Dragon Age 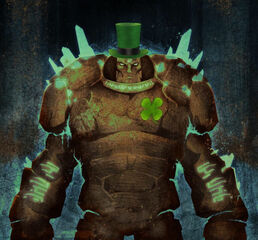 A mock up Shale tile from the Dragon Age Keep team in celebration of St. Patrick's Day 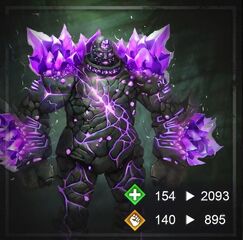 Shale with Spirit Crystals in Heroes of Dragon Age 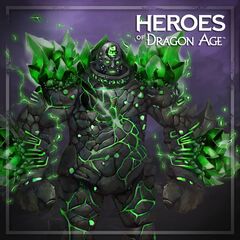 Artwork of Shale with Nature Crystals in Heroes of Dragon Age