According to the various sources, shades are either the true form of a demon when appearing outside of the Fade without a host[2][3] or the soul of the dead who have come back from the Fade into the mortal world.[4][5]

Additionally some scholars believe their confusion with the waking world leaves them unable to possess the living or dead. It has also been speculated that shades believe that they are still in the Fade. Some shades however are content to float as shadows assaulting the minds of those they encounter; living beings are thus weakened when a shade is within close proximity.[3]

"It has often been suggested that the only way for a demon to affect the world of the living is by possessing a living (or once living) body, but this is not always true. Indeed, a shade is one such creature: a demon in its true form that has adapted to affect the world around it.

My hypothesis is this: we already know that many demons become confused when they pass through the Veil into our world. They are unable to tell the living from the dead, the very static nature of our universe being confusing to a creature that is accustomed to a physicality defined entirely by emotion and memory. Most demons seek to immediately seize upon anything they perceive as life, jealously attempting to possess it—but what of those that do not? What of those that encounter no life, or fail to possess a body? What of those that are more cautious by their nature?

These demons watch. They lurk. They envy.

In time, such a demon will learn to drain energy from the psyche of those it encounters, just as it did in the Fade. Once it has drained enough, it has the power to manifest and will forever after be known as a shade. Such a creature spurns possession. It instead floats as a shadow across its piece of land, preying upon the psyche of any who cross its path. Perhaps it believes itself still in the Fade? There is evidence to believe that is so.

A shade will weaken the living by its very proximity. If it focuses its will, it can drain a single target very quickly. Some have even been known to assault the minds of a living victim, causing confusion or horror and making the target ripe for the kill. The tragedy of a shade is perhaps that, once it has drained a target whole, its appetite is only heightened rather than slaked."

—From the journal of former Senior Enchanter Maleus, once of the Circle of Rivain, declared apostate in 9:20 Dragon Age.[6]

Shades are divided into two types: lesser and greater. The latter are more powerful and have several additional abilities. Both types have 50% Fire resistance and 5% Spirit resistance, and are immune to stun and sleep effects. Finally, they rely on mana and are thus vulnerable to templar abilities, Mana Drain, Mana Clash and Magebane Poison.

While on their way toward the final piece of the Juggernaut armor set, the Warden will encounter some uncommon shades. During the Elven Ritual, two ghostly shades will appear if the ritual is performed incorrectly, or if it is performed without the tablet. These ghostly shades use AI packages of Arcane Horrors, and thus can cast some dangerous spells unavailable to regular shades. On the other hand, they do not have any elemental resistances regular shades have. Another shade guards the sarcophagus containing the Juggernaut Plate Armor, and appears as the ghost of a female elf. Interestingly, the female elf shade has Captivating Song as one available abilities (though she does not use it), and both undead and demon resistances - meaning she has 75% Cold resistance, 5% Spirit resistance, and 50% Fire resistance from the "demon" part, but -25% Fire resistance from the "undead" part. She also uses an Arcane Horror AI package.

Greater shades also use in addition to the above: 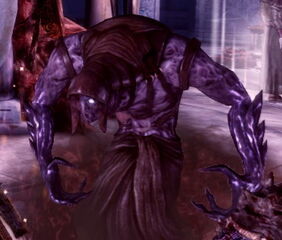 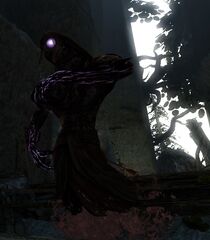 A Shade in Dragon Age II 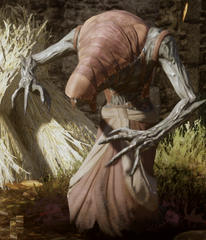 A Shade in Dragon Age: Inquisition 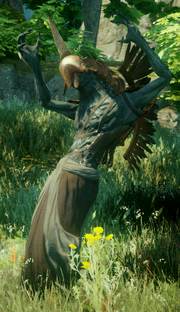 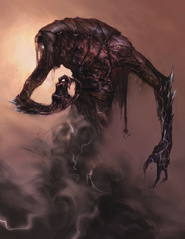 Concept artwork of a Shade[5] 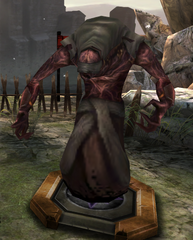 A Shade in Heroes of Dragon Age