watch 02:06
The Loop (Games)
Do you like this video?
“Bad things should happen to bad people. We find someone not so bad, maybe he'll end up not so dead.”

Sera is an elven archer and potential companion in Dragon Age: Inquisition. She is a romance option for a female Inquisitor.

Sera is impulsive and reactionary, taking delight in humbling the established authority she views as arrogant and selfish. For her, it's not about what's right, it's about what's right now. She sees actions taken for the 'greater good' as just an excuse to hurt others who don't deserve it simply because it's easier, and is focused on the 'little people' that are often ignored or abused by the powerful. She was a member of the enigmatic group of rogues known as the Friends of Red Jenny, yet the coming of the Breach terrified her.[1] Fortunately, Sera and her "friends" can be frightening, too, and if she needs to put an arrow through some baddies so regular people can sleep at night, so be it. Sera fights for those caught in the middle, but she also needs order restored. The world has to be normal so she can play.

Sera was orphaned as a child in Denerim and was caught stealing at a young age. She remembers being from the Elven Alienage in Denerim as an infant, though Sera denies this and rejects the "arsehole" residents of the alienage as well as its "stupid" Vhenadahl, that so-called "real" elves always have and pray to.[2][3] Lady Taraline Emmald, a sick and barren woman, took her in and became Sera's patron. When she died of sickness, well before the Blight, Sera inherited her estate, but rejected it and the fortune that came with it. Being raised by humans, as well the psychological abuse faced during her time as Lady Emmald's ward, cemented a distinctly non-elven point of view and a disregard for elven culture in general.[4] Sera's skills as a rogue and archer are self-taught, not trained by others.

After the Inquisitor meets with the Chantry and templars at Val Royeaux, an arrow with a message attached lands nearby, giving the locations of three satchels with instructions which starts A Friend of Red Jenny quest. Should the Inquisitor choose to follow these clues, they eventually confront an Orlesian nobleman, who assumes that the Inquisition was targeting him. Then suddenly, Sera reveals herself and executes the noble with an arrow. She then introduces herself to the Inquisitor and offers to join the Inquisition to fight for those stuck in the middle of the chaos.

While in Haven, a Herald who is not a Rogue may ask Sera, through a dialog option, to open the locked doors in the lower level of the Chantry. To do this, interact with one of the locked doors and the message "Requires a rogue" will appear, unlocking the necessary dialogue option with Sera ("I need a lock picked."). On PC, if the message does not appear, try going into mouselook mode and using the interact button instead of the mouse.

At Skyhold, Sera will surprise the Inquisitor by planning a picnic on the roof (only if your approval is high enough). Sera tells the tale of how her foster mother, Lady Emmald, lied to her about being unable to make cookies and kept the truth about buying cookies from the baker by telling her he [the baker] hated elves. When she discovered the truth, she resented Lady Emmauld and had an aversion to cookies ever since; calling them "pride cookies" because it reminded her that her foster mother elicited an unwarranted hatred between her and the baker and made her insecure about herself just to protect her own pride. She tells the Inquisitor she wants to make better cookies so she can overcome all the issues she associates with them and like them again.

If Inquisitor is friends with Sera:

In the end Sera went back to her life as a Red Jenny. If Cassandra or Leliana is Divine, she offers the services of the Friends of Red Jenny to the Divine should the nobles get out of line.

A Friend of Red Jenny

Red Jenny and the Bad Goods

A Trouble of Red Jennies

Red Jenny and the Imposters

Red Jenny and the Tantervale Charade

A Woman Who Wants for Nothing

Sera was raised by humans and doesn't see herself as being particularly elven. Asking her about or supporting anything "elfy", such as elven heritage and the history of elves, will cause her to disapprove. She likes the world to be simple and believes most problems can be solved by fighting things out, but she is also frightened of magic and will disapprove of any actions supporting magic or mage freedom.

Sera is unique amongst Inquisition's companions in that the amount of approval she gives may vary depending on the Inquisitor's race. Qunari will gain the most approval with her and elves will gain the least. Elves may also gain additional disapproval under certain circumstances.

Sera is a potential love interest for female Inquisitors only.

The player can start flirting with Sera soon after recruiting her into their party. Upon welcoming her into the Inquisition, the player has the option to tell Sera that they think they'll like having her around and they hope she feels the same. If the Inquisitor is female, Sera will flirt back. She will also mention that she'll need to start calling the Inquisitor something other than "Herald".

If a female Inquisitor has flirted with her at any point, Sera will approve if she's asked about herself. She will flirt back, saying "Oh, yeah? Interested, are you?"

Although Sera's romance is available for all female Inquisitors, she will respond to the Inquisitor differently depending on their race and class. For instance, Sera expresses a particular fondness for female Qunari. (In her words, "Woof.") Alternatively, she has the hardest time opening up to a Dalish elf Inquisitor, due to her distaste of everything "elfy". Sera is also scared of magic and will express distaste about the Inquisitor's magic use if she is a mage, such as asking the Inquisitor to use less magic once they've chosen a specialisation, although the Inquisitor can gain approval by reassuring her that they'd never do anything to disappoint her. As the romance progresses, Sera will express that the Inquisitor is an exception to her beliefs about magic during party banter.

After the Herald reaches Skyhold and is titled "Inquisitor", they can begin to pursue their romance with Sera more seriously. Sera will pull the player aside and congratulate them on their title, as well as express concern about The Elder One and what he means for her religious beliefs. During the conversation, she will say, "How pretty are you that I actually think this shite is possible?" If the Inquisitor flirts back, Sera will say that they should "see how things go" in terms of their relationship.

After the relationship officially begins, the Inquisitor is able to kiss Sera any time she wants to when she's in Skyhold. Once Sera's approval is high enough, there will be a cutscene where the player eats cookies on the roof with Sera. After this cutscene they are also able to spend time together on the roof at any time the player chooses.

If the Inquisitor takes Sera adventuring, Sera will occasionally make passing references to their relationship during party banter, or make comments that prompt the Inquisitor to remark upon it. For example, Sera will propose a plan to Blackwall wherein she seduces a hypothetical man. The Inquisitor will object and Sera will then explain that at the point in the plan when the man proposes sleeping with her, Sera will tell him that she prefers his wife and then punch him in the face.

Eventually, Sera will mention to the Inquisitor that she bought them a hat. While the hat ended up being stuffed with apples in an attempt to mock Corypheus, the gift begins to make the Inquisitor wonder if she should give Sera a gift in return to express her fondness. The quest A Woman Who Wants for Nothing will begin, and the Inquisitor must ask the other members of the Inquisition if they know what type of gift she can buy Sera.

While most of the Inquisition will make negative comments about the Inquisitor romancing Sera in response, talking to everyone is the only way that the quest can be completed. Most companions will not have any suggestions, but Vivienne will sarcastically remark that the Inquisitor should just shave her pubic hair to say something crude. The Inquisitor can agree or decline. If the Inquisitor rejects the idea in conversation with Vivienne, Dorian will also suggest it.

If the Inquisitor agreed to Vivienne's idea instead, a scene will show a naked Sera and Inquisitor in bed with Sera laughing in disbelief that the Inquisitor shaved something into her pubic hair. Sera will fall off of the bed in laughter and pull the Inquisitor down with her.

After What Pride Had Wrought, Sera will comment that she believes everything in the temple was from demons, and not the elven gods. The inquisitor can say she disagrees, and if she is Dalish, she can remind Sera that she believes in the Creators. This will result in a fight, where the relationship will end, (with Sera saying she should have known she wasn't "elfy enough" for the Inquisitor) or the player can agree to Sera's request to say she was "just kidding" about her religious beliefs, continuing the relationship. Sera will disapprove if other races say "But it's important" or "I've said I'm not her Herald", but she will only end a relationship with an elf.

The Inquisitor can continue to see romantic cutscenes and conversations throughout the rest of the game. After the Inquisitor defeats the Elder One, Sera will join the Inquisitor in her chambers when the Inquisition celebrates at Skyhold. Sera will confess how much she loves the Inquisitor's ability to stay herself despite all of the "Herald" stuff, and she can't wait to continue to stay by the Inquisitor's side. The two of them will walk out on to the balcony, looking over the beautiful landscape together as the scene fades to black and the credits roll (closing on a suggestion from Sera to push the bed off the balcony to see what happens).

This section contains spoilers for:
Trespasser.
If the Inquisitor is still in a relationship with Sera during the events of Trespasser, Sera will ask the Inquisitor to marry her. The Inquisitor can either say that it's enough that Sera is with her, or call her a loony and say, "All the yesses. Every frigging one."

Despite being an elf, Sera is "human-trained" rather than "elf-trained" for the purposes of what armor she can wear. She is the only companion with this quirk.

Sera's Cabinet of Wonder Whose It Was 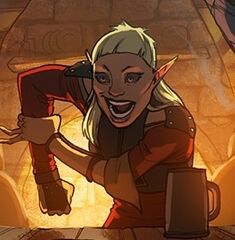 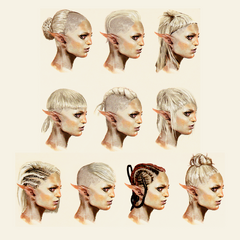 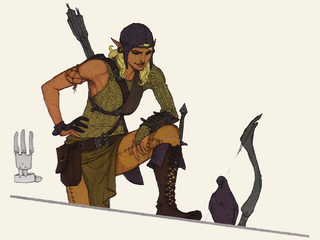 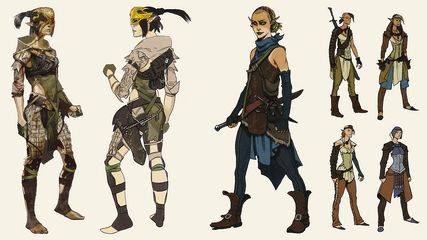 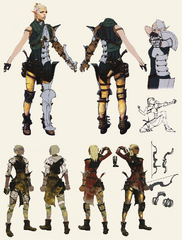 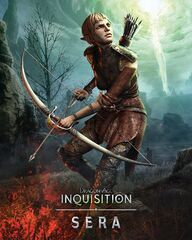 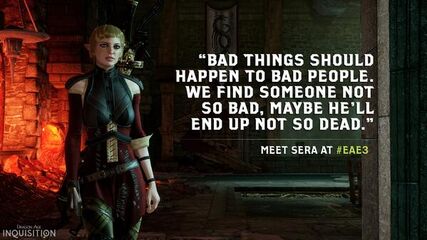 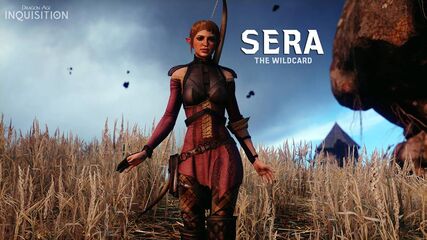 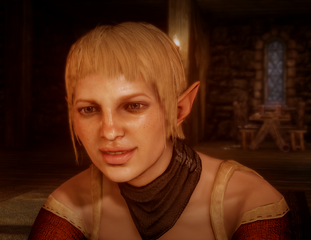 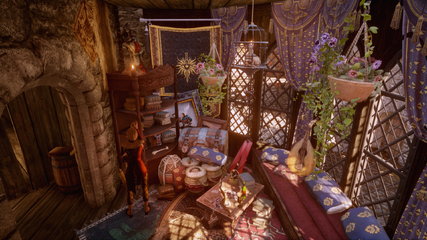 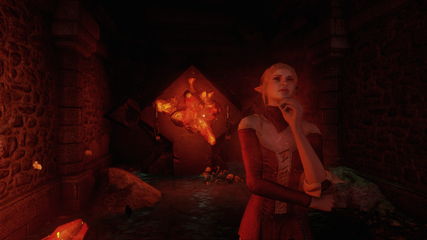 Sera under the influence of red lyrium during In Hushed Whispers. 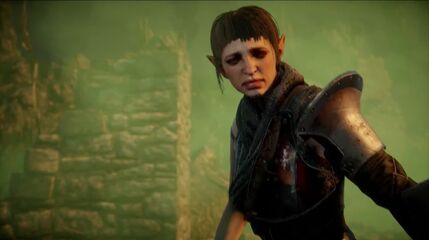 Sera in the Enemy of Thedas trailer 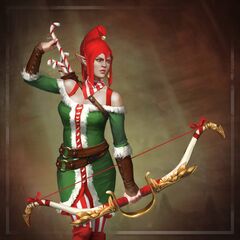 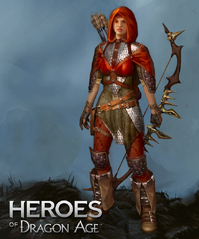 Retrieved from "https://dragonage.fandom.com/wiki/Sera?oldid=881168"
Community content is available under CC-BY-SA unless otherwise noted.