Seheron, the largest island in Thedas,[1] is a humid jungle nation in the Boeric Ocean, directly north of the Tevinter Imperium. The largest city is also called Seheron.

Seheron had been in the possession of the Tevinter Imperium from its earliest days, and its architecture reflects the long occupation of the Imperium. However, after successfully claiming Par Vollen in 6:30 Steel, the Qunari turned their attention to Seheron and landed on its shores in 6:32. After ten years the Qunari had not only taken the island from Tevinter entirely but also occupied a significant portion of the mainland Imperium.[2][1]

The Qunari were eventually pushed back from the mainland and entrenched in Seheron. The Battle of the Nocen Sea followed and proved to be the largest naval engagement in recorded history, ultimately leading to a stalemate between the warring countries.[1]

Generations passed as the people of Seheron sought to rebuild the war-torn country. However, the Qunari mounted another offense to retake the island between 8:55-8:58 Blessed and finally wrested lasting control of the island from the Imperium.[2][1]

In 9:25 Dragon, the Qunari lost their Arishok of twelve years to wounds sustained in Seheron. After ninety days of testing, a successor was finally chosen: the Kithshok of Alam's garrison, who had long been considered by Tevinter to be one of the main obstacles to their reconquest of the island.[3]

Seheron is still "kabethari" to the Qunari—a land to be conquered and converted, literally "those who need to be taught." The Qunari maintain a loose control, but meet a heavy resistance from Tevinter. To add to the chaos, both of them are opposed by Tal-Vashoth in the north of the island, and by native rebels.

Among the Qunari, the beresaad task their youngest soldiers with protecting the port of Seheron[4]. It is a relatively easy task, mostly requiring a tolerance for boredom and the ability to pay close attention even after hours of inactivity. There are occasional threats to the city's security–assassins, spies, infiltrators–and the young beresaad stationed there, most of them under eighteen years old[5], are the city's first line of defense. However, while the city proper is considered a safe post, service elsewhere on the island is considered hazardous. Scores of Qunari soldiers fall to local insurgents, Tevinters, and Tal-Vashoth. Even those who survive are left scarred, as prolonged stress breaks the wills and minds of veteran officers and new soldiers alike. The Qunari call the condition asala-taar, or "soul sickness". The tamassrans struggle to compensate for the losses, forcing the antaam to promote new officers as quickly as they are lost.

Some native Seheron rebels have resorted to guerilla warfare against the Qunari and Tevinter occupants.[6] Known as the Fog Warriors, tales of their prowess and stealth have given them a reputation on the island and the mainland as well.

The fog dancers tell stories of the land Seheron once was. They say that the griffons of the Grey Wardens came from Seheron. They speak of the ancient Curse of Nahar that brought the fog, and the promise that will one day lift it. They tell about the March of Four Winds, about the lost people who fled to the northern islands and about the heroes who learned from the elves.[7]

Farmers in the mountains grow cinnamon and nutmeg trees. They are frequent targets of the Tal-Vashoth.[8]

The battle in 8:55 Blessed leveled much of the architecture and infrastructure. Large portions of the island remained outside of Qunari authority. The native people of the island not under Qunari rule came to hate the Imperium as much as the Qunari due to the violent and long-lasting warfare and the toll it had taken on the island. In spite of this dissent, many inhabitants have taken willingly to the Qun as it offers an alternative to the oppression of Imperial rule, particularly to the large population of former elven slaves on the island. Many of those elves now hold high office within the Qunari ranks, helping the invaders oust their old masters.[6] 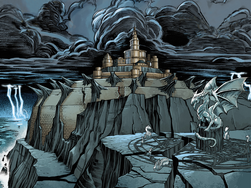 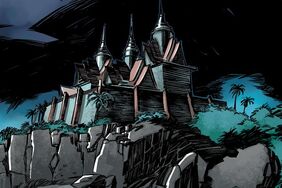 Tevinter-Qunari naval battle for the island