“Anything you need is yours. For a reasonable price, of course.”

Seggrit is a merchant in Dragon Age: Inquisition; his stall can be found in the village of Haven located in the Frostback Mountains.

Seggrit is one of the few merchants serving in Haven after the Conclave is destroyed. Once the Inquisition has been restored, Seggrit will agree to help by offering various supplies at what he claims is a "discount." Seggrit's wares are unlocked after completing the main quest The Threat Remains. 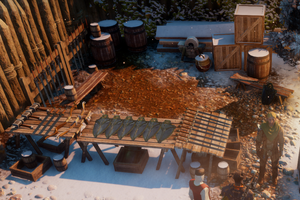 Retrieved from "https://dragonage.fandom.com/wiki/Seggrit?oldid=865169"
Community content is available under CC-BY-SA unless otherwise noted.