The Seekers of Truth are an Andrastian order that acts as a secret police force for the Orlesian Chantry, sanctioned directly by the Divine in Val Royeaux.

The organization acts as a check on the power of the Templar Order, acting in a secretive, investigative and interrogative capacity to root out corruption and protect the Chantry from internal and external threats. They also may become involved in the hunting of particularly cunning apostates. Templars fear and despise the Seekers, as they must usually involve themselves when the templars are failing in their duties.

The Seekers of Truth and the Templar Order were once known as the Inquisition, a group of people who fought against the threat of dark magic after the First Blight. Some accounts suggest that the Inquisition was always known as the Seekers of Truth and that they strove to restore order in a time of chaos through their even application of justice.[1][2]

In the twentieth year of the Divine Age, the fledgling Chantry convinced the Inquisition to unite under the banner of their common faith.[3] Upon signing the Nevarran Accord, the two organizations jointly created the Circle of Magi[4] and established the Templar Order as wardens for the Circles and guardians over magic use.[5] Under the Accord, senior members of the Inquisition formed the Seekers of Truth as they are known today.[3]

The vast majority of Seekers are recruited as children.[6] In their roles as overseers of the Templar Order and the right hand of the Divine, they serve as the Chantry's investigators and are given considerable latitude to function outside the law.[7] The leadership hierarchy of the Seekers runs parallel to that of the templars, although a senior Seeker outranks any templar.[8] Traditionally, Seeker officers who failed their troops in their duties were exiled to the Sea of Ash, a volcanic wasteland on the southwestern edge of Orlais.[9]

Dragon Age: Dawn of the Seeker[]

In 9:22 Dragon, the Seekers were involved in a major blood mage conspiracy with roots in the Templar Order and the chantry. Knight-Commander Martel conspired with Grand Cleric Callista of Orlais to overthrow Divine Beatrix III with the help of the mage Frenic. The blood mages used an elven girl named Avexis who possesed the power to control animals, including dragons. The girl was saved by the Seekers led by Byron and Cassandra Pentaghast, however, the elf was later kidnapped once again. Frenic, using blood magic to control her and her abilities, summoned several dragons and a high dragon to the Grand Cathedral to kill the Divine. Before he could however, he was stopped by Cassandra.

Working with mages from the White Spire Circle of Magi, Cassandra managed to stop the conspiracy, killing the traitor templar commander, but not before Martel managed to murder High Seeker Aldren. Grand Cleric Callista was killed by Frenic. After the deed, Cassandra was promoted within the Seekers and was given the titles of the Hero of Orlais and the Right Hand of the Divine.

Following a failed assassination attempt of Divine Justinia V by a group of mages seeking freedom and a series of suspicious murders at the Spire, Lord Seeker Lambert van Reeves dismissed Knight-Commander Eron and took control of the Circle directly. Lambert attempted to use Knight-Captain Evangeline to sabotage Archmage Wynne's investigation into the Rite of Tranquility. Evangeline disregarded her orders however and Lambert was forced to allow the Mages to gather at the White Spire to discuss the results of Pharamond's research. When Grand Enchanter Fiona called for the Circle to separate from the Chantry, Lambert stormed the chambers with Templars and several other Seekers, accusing the mages of treason and demanding they surrender. The Mages refused to back down and the Templars attacked, killing several and taking the rest prisoner. Lambert apprehended Rhys, Wynne's son, himself. Divine Justinia summoned Lambert to the Grand Cathedral in the hopes of distracting him so her agent could liberate the mages, however Lambert returned too soon and managed to defeat Cole in combat using the Litany of Adralla and subsequently killed Evangeline in combat (she was later saved by Wynne) before being forced to flee.

With the dissolution of the Circle of Magi, and the Divine's apparent complicity in aiding apostates, Lord Seeker Lambert declared the Nevarran Accord null and void in 9:40 Dragon. By separating the Seekers of Truth and the Templar Order from Chantry authority, Lambert claimed sole responsibility for managing the mage situation in Thedas. Following this dissolution, a templar host was set to march on the newly independent mages gathered at the fortress of Andoral's Reach, effectively starting the Mage-Templar War in earnest. Lord Seeker Lambert himself however, vanished mysteriously just after the Seekers and Templars rebelled, leaving no trace.[4][10]

In 9:40 Dragon, Seekers still loyal to the Divine and the Chantry captured the dwarf Varric Tethras in the hopes of learning more about Hawke, the Champion of Kirkwall, in an effort to resolve the current world-spanning war. They appear to be interested in the Warden-Commander as well. It is also revealed that the Seekers attempted to investigate Corypheus's prison prior to arriving in Kirkwall but were turned away by the Grey Wardens.

During Hawke's time in Kirkwall, Seeker Cahail also formed an unusual proxy group including an Apostate known as the Band of Three to investigate Kirkwall's unique history of Blood magic and attempt to discern the purpose of the ancient Tevinter rituals carried out there when the Imperium still ruled the city.

A member of the Seekers of Truth travels to Serault to inform the Marquis of Serault of a secret they may use to potentially blackmail Divine Justinia V. The Seekers also led the attack on a prior Marquis, The Shame of Serault, after he became an Abomination.

In 9:41 Dragon, after Lord Seeker Lambert's disappearance, Seeker Lucius Corin took over his position and continued to lead the rebel Seekers and Templars against the rebel mages.

In the wake of the mage uprising, the Seekers are dispatched to investigate the Circle of Magi at Dairsmuid in Rivain. Rivain had never fully accepted the function of the Circle and such allowed the mages in its borders a great deal more freedom and unique practices in accordance with their culture. The Seekers invoked the rite of anullment and led the Templars in a brutal annulment of the circle with many deaths on both sides.

Cassandra later enlists the Inquisitor to investigate the disappearance of the Seekers. Using the Inquisition's resources, they find out the missing Seekers' location in the castle of Caer Oswin, which is occupied by the Order of Fiery Promise—a cult who believe themselves the true Seekers and have allied with Corypheus in their quest to end the world to create a new one. Since the Seekers were resistant to the effects of red lyrium and therefore cannot be controlled by Corypheus, Lord Seeker Lucius led them into an ambush by the cultists, who forced them to consume red lyrium which made them fatally ill. Lucius believes that the Seekers are "abominations" responsible for creating the Chantry and the Circle of Magi, resulting in a never-ending war. It being apparent that the Lord Seeker had converted to the Promisers' beliefs, the Inquisition then kills Lucius and his fellow cultists.

Later, Cassandra reads the Book of Secrets that was in Lucius' possession and learns the weight of the secrets kept by the Seekers, making her hesitant to consider rebuilding the Seekers (At this point, it is also revealed that Lord Seeker Lambert knew about the possibility of reversing Tranquility all along). The Inquisitor can convince her that Seekers should or shouldn't be restored.

If encouraged to rebuild the Seekers of Truth, Cassandra optimistically hopes that some Seekers survived and vows to find them. When she does, they will all read the book, ending the tradition of secrecy among its members and establish a new charter to truly perform "the Maker's work". Although Cassandra is unsure of the specifics of what doing the Maker's work entails, she believes that new Seekers must make a conscious effort of seeking out and defining that purpose.

If the Templars are recruited, Cullen is cured of Lyrium addiction and the Seekers are rebuilt:
Many of the Templars allied with the Inquisition follow Cullen's example and slowly endure the agonizing process of lyrium withdrawal. No longer dependent on the mineral, many of these former Templars join the renewed Seekers of Truth and rededicate the order to justice for all.

If Cassandra was encouraged to rebuild the Seekers:
She tells the Inquisitor that she managed to find some surviving Seekers and upheld her promise to show them the Book of Secrets. Those she deemed suitable were allowed to join her in restoring the Seeker order. She now trains new recruits with full disclosure of their secrets, though it is a slow process.

Cassandra would later spend time in the Hunterhorn Mountains north of Orlais, where she worked to rebuild the Seekers. For a time, the new Seekers remained reclusive, showing no interest in worldly affairs and working to a purpose few outside their order could guess.

The all-seeing eye is the insignia of the Seekers of Truth. It represents the Seekers' role as investigators and inspectors of the Chantry. Uncovering the hidden practice of magic and seeking to stamp out its corruption, even within their own ranks.[11] Constellation: Visus, known as "the Watchful Eye", was originally a symbol of the Lady of the Skies. In Andraste's time it came to be associated with the Maker, and a sword was added after her death. The early Inquisition took Visus as their symbol, and upon their partition the Templar Order took the sword while the Seekers of Truth retained the eye.

Seekers do not use lyrium, which makes their abilities different from templars, though they are able to utilize templar abilities. They develop their abilities through ritual and many years of dedicated training. Seekers also have abilities that templars do not. Seekers cannot be possessed and are immune to mind control. Some Seekers can gain other gifts, depending on the individual, such as setting the lyrium within a person's blood aflame. This can be used to bend a mage or templar to the Seeker's will, interrogate, or paralyze. Once there was a Seeker who could use the ability to kill, though this is considered rare.[12]

This section contains spoilers for:
Dragon Age: Inquisition.
During Promise of Destruction, it is revealed that seekers have also proven highly resistant to the corrupting effects of red lyrium. However, they can still be corrupted by ingesting the mineral, either willfully or forcefully, resulting in immense pain as is the case with Daniel or any ordinary person who has come into sufficient contact with red lyrium.
This section contains spoilers for:
Dragon Age: Inquisition.
To become a seeker, an initiate must spend months in a vigil. A full year of fasting, prayer, and separation from all distractions- including other people. They empty themselves of all emotion, focusing only on the purity of their devotion. This renders the initiate Tranquil, and the vigil summons a Spirit of Faith to touch the initiate's mind thus breaking the tranquility and giving a Seeker their abilities. This ritual is kept secret from all the Seekers and the Chantry, being known only by the Lord/Lady Seeker.[13] 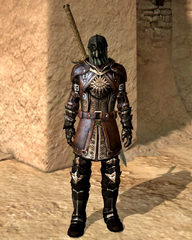 A Seeker of Truth 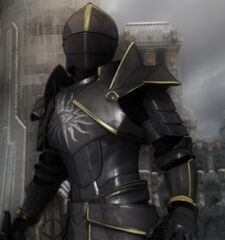 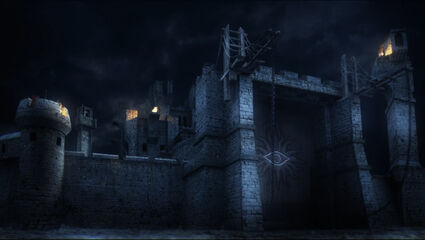 The headquarters in Val Royeaux 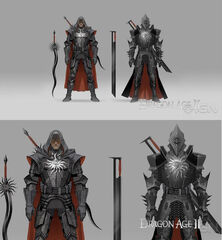 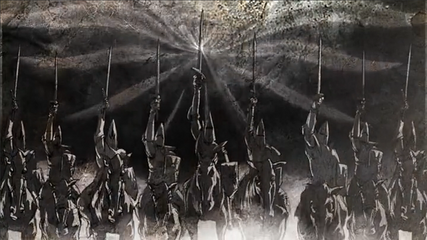 Artwork of a group of mounted Seekers