“Who better serves the Maker: a brother of the faith, or a prince who can sway a whole city?”

Sebastian Vael is a Chantry Brother and a member of the royal Vael family of Starkhaven—contending for the title of Prince after the murder of his family. Being both a skilled archer and rogue, he is a potential companion in Dragon Age II available through the The Exiled Prince DLC, and a romance option for a female Hawke.

The Vaels believed that their youngest son of three, Sebastian, was a disgrace to the family name, and would be a weight around his brothers' necks. He spent his considerable allowance on drink, entertainment, and the wooing of the ladies of Starkhaven. Fearing that Sebastian might father a bastard that could grow to challenge the Vael throne, his parents forced him into the Chantry, exiling him from their principality.[2] While he was not without faith, Sebastian did not wish to give up his life in service to Andraste so early in his existence, and with the aid of Grand Cleric Elthina, escaped. Elthina helped him to regain his faith however, and after reflection, Sebastian returned to the Chantry, this time willingly, and through the front door. Embracing his new role, Sebastian took vows of poverty and chastity to become a sworn brother of the Chantry... until word of his family's deaths forced him to take up worldly concerns once again.

Now, Sebastian is forced to re-enter the viper's nest of princely politics when his family is brutally murdered, leaving him as the sole surviving heir.[3]

Banding together with Sebastian and his unshakable loyalty and excellent aim, Hawke must choose to either avenge Sebastian's murdered family to reclaim his title or direct his holy vengeance on their enemies in Kirkwall.

Following the murder of his immediate family by the Flint Company mercenary group, Sebastian has an argument with Grand Cleric Elthina in front of the Kirkwall Chantry in Hightown. In his anger he puts up a notice, promising a reward to whomever kills his family's murderers. The Champion has a choice of accepting Sebastian's bounty from the Chanter's Board. If so after all of the Flint Company has been destroyed, Hawke can meet with Sebastian in the Chantry. Sebastian will thank Hawke for their aid and go to petition the Viscount for aid in retaking Starkhaven. Hawke will not see him again until three years later.

When he is met for the second time, Sebastian will join Hawke in full. He has discovered who hired the Flint Company, an old Kirkwall noble family who was once allied with his own, the Harimanns. Sebastian and Hawke discovered that the Desire Demon Allure had corrupted the family, which drove Lady Harimann to become obsessed by her desires to seize Starkhaven until it was all she could think of. She masterminded the assassination and placed Sebastian's feeble cousin on the throne as a puppet ruler. Johane Harimann is killed by Sebastian and Hawke and the demon is defeated. In the aftermath, Sebastian becomes conflicted over whether he should remain in the Chantry or retake Starkhaven.

By 9:37 Dragon, the Divine began to fear that the situation in Kirkwall was growing out of control and that more extreme measures might be warranted, potentially even an Exalted March against the city itself. Sebastian was asked by Elthina, along with Hawke, to meet with Sister Nightingale, the so called "Left Hand of the Divine" and persuade her this was not necessary. Before the rendezvous could take place however, they were attacked by a Mage extremist faction, The Resolutionists. Unable to persuade the Divine's agent, Sebastian attempted to persuade Elthina to go to safety at the Grand Cathedral in Orlais. Elthina refused however, not wishing to abandon Kirkwall during a crisis and so Sebastian resolved to remain as long as Elthina did.

When Anders destroyed the Chantry, killing Elthina and many others, Sebastian demanded Hawke kill Anders or else he would retake Starkhaven and seek vengeance on all of Kirkwall.

If Hawke kills Anders and side with the mages, Sebastian will join, saying that all creatures have the right to redeem themselves in the Void while the others are free to walk with the Maker. He will then vow to stop the "tyranny" of the Templars. Alternatively, siding with the Templars shows that he is eager to end the threat of all "Maleficarum".

Sebastian is not mentioned in the epilogue by Varric Tethras, unlike other love interests.

If Sebastian was recruited:
The Inquisitor can ask Varric Tethras about his fate. Varric will state that he went back to Starkhaven. In the War table quest An Ally from Starkhaven, it is revealed that Sebastian reclaimed his title as Prince of Starkhaven and is extending a hand of friendship to the Inquisition.

If Sebastian was romanced:
Later upon asking Hawke why she is alone, she will state that Sebastian is the Chantry advisor in Starkhaven. The throne is still in contention there. Without him, it would be open war among the noble families. He'd have dropped everything to come with her, but he'd have hated himself for doing it.

If Anders survived and the Inquisitor accepts Sebastian's offer of friendship:
Sebastian reclaims his title as Prince and later leads an invasion of Kirkwall. In the mission Annexing Kirkwall, Sebastian requests support from the Inquisition in helping him suppress the city's resistance forces led by Guard-Captain Aveline Vallen and hunt down Anders' associates. The Inquisitor can choose to send Leliana's agents to bolster Sebastian's forces and strong-arm Aveline to back down or send Cullen's military to bolster Aveline's resistance forces and repel Sebastian's occupation forces back to Starkhaven.

If Anders was executed and the Inquisitor accepts Sebastian's offer of friendship:
Sebastian Vael reclaims his title as Prince of Starkhaven and in 9:41 decides to aid in the reconstruction of Kirkwall, which continues to suffer from Anders' actions. In the mission Aiding Kirkwall, Sebastian requests that the Inquisition send in soldiers and workers. The Inquisitor can choose to heed Leliana's advice and ignore the request in order focus resources on defeating Corypheus, have Josephine appeal to noble allies to help Kirkwall, or order Cullen to send in troops to expunge red lyrium from the Gallows.

Shortly after attending Varric Tethras' appointment as Viscount of Kirkwall, Ser Aaron Hawthorne and his squire Vaea receive an invitation to Sebastian's birthday party in Starkhaven. Varric reveals that he's the one who secured the invitations to help Vaea in her mission to free the two Inquisition agents imprisoned in Sebastian's keep. Though Sebastian has refused to stoop to torture, despite the insistence of his Seneschal, the agents are being questioned daily as to their motive, which they have so far kept secret. When Vaea successfully free them from their prison, Tessa Forsythia and Marius reveal that their mission was to steal a journal of study on red lyrium kept by Sebastian. Though Sebastian is one of their allies, and the Inquisition trusts him not to misuse this information, they are worried about the journal falling into the wrong hands.

During his birthday party, Sebastian is gifted a blue crystall skull by Professor Cedric Marquette of the University of Orlais. He is also the one who prevents a fight between the professor and Ser Aaron Hawthorne from breaking out. Despite his intervention, more conflicts arise. As Seneschal Granger leaves the party to investigate a disturbance, Sebastian asks Varric for help.

Sebastian later meets up with Ser Aaron, Vaea and Granger, while they are discussing the theft of the red lyrium's journal. Sebastian is quite taken by Vaea's heroism and exploits, and believes her story over Granger's. He regrets that the journal was stolen; Ser Aaron vows to follow whoever stole the journal. Sebastian gives them his eternal gratitude and says that they are welcome to return at any time.

Friendship with Sebastian can generally be earned by encouraging him to stay with the Chantry, by siding with the Chantry and the templars and by being helpful to those in need.

Rivalry with Sebastian can generally be earned by pushing him to retake Starkhaven, by siding against the Chantry and by making aggressive, disagreeable or otherwise "dishonorable" choices.

Even though Sebastian can be romanced, he will never actually sleep with Hawke due to his vow of chastity.

Note: Romancing Sebastian does not fulfill either of the romance achievements.
This section contains spoilers for:
Dragon Age II.

It is possible to win Sebastian's heart if:

If you romance him as a rival, he will say that he will take back Starkhaven, saying that he will give Hawke no less than a Prince. If Hawke agrees with his encouragement to compete for the title of Viscount, he will claim that the marriage between the Viscountess of Kirkwall and the Prince of Starkhaven will be the strongest alliance the Free Marches has ever seen.

If you romance him as a friend, he will vow to stay in the Chantry as a brother of the faith, but he will ask Hawke to become a sister of the faith so they can have a chaste marriage in the eyes of the Maker.

Friendship and rivalry will noticeably affect his demeanor during The Last Straw. While he will follow Hawke no matter which side he chooses as long as his demand is met, the choice to befriend or rival him as well as the side chosen will affect how he views the situation.

As a Friend, his demeanor is much calmer. On the mage side, he will show sympathy for the mages, and say that the party must help those who have suffered at the Chantry's hands, that they must show the Chantry they cannot tolerate tyranny among its templars and they'll worry about the mages after. He is unsure if what they're doing is right, but he will not abandon Hawke in this. On the templar side, he will lament that the mages will not rest until they have destroyed the Chantry, and that there was never any peace to be had with them.

As a Rival, his tone is much more direct and aggressive. On the mage side, his statements regarding this are the same, but he does not indicate any doubt over the decision. Instead, he intends "victory, at any cost." On the templar side, he vows revenge on every single mage for the actions of one man.

Starkhaven Longbow - found on a dead Flint Company mercenary at the Harimann Estate during the quest Repentance.

Upgrades to Sebastian's armor, Vael Family Armor, can be found at the following locations:

Protection of the Faith (Act 3) – found on the Templar Lieutenant in Hightown during the Best Served Cold quest. Extra rune slot.

Gift of the Epicurean – requires Mark of the Assassin 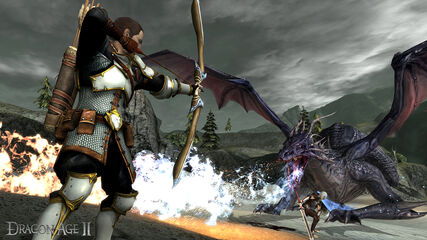 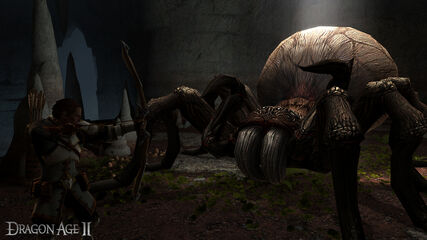 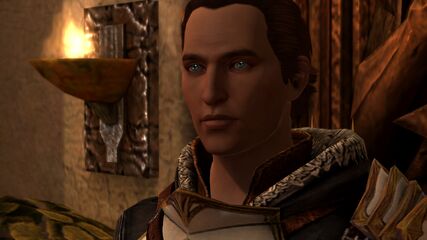 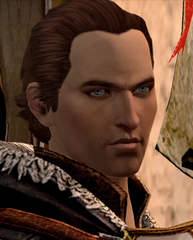 First encounter with Sebastian in the Chantry Courtyard 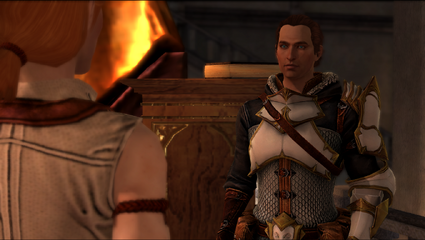 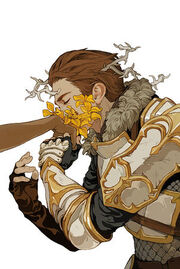 Sebastian in Heroes of Dragon Age 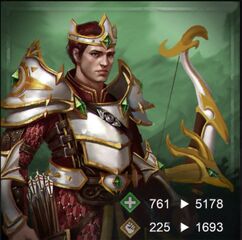