Scaled Ones are a mysterious reptilian race. Their self-designation is unknown.

The Scaled Ones are described as tall humanoids covered in scales, with powerful jaws and sharp talons. Their warriors wore fine armor and weapons, while their priest was dressed in robes and was able to breathe out and cast fire. They used an unknown language to communicate.

The Scaled Ones waged war with dwarves sometime after the founding of the Tevinter Imperium in -1195 Ancient, but before the destruction of Cad'halash Thaig around -975 Ancient. Besides some ravings they seem to have vanished from the historical record, and none seem to have been seen ever since.

The Scaled Ones appear to have a religion of sorts. They constructed a golden altar fashioned in the shape of fire in the center of the camp, with enemy corpses, drained of blood, hanging on the tip of each flame. Dwarves witnessed a ceremony during which a presumably female priest chanted and ignited blood in a basin raised towards the altar, while the other Scaled Ones bowed low. 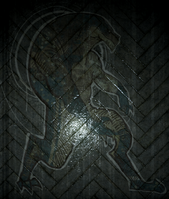 A fresco of a reptilian in the Lost Temple of Dirthamen 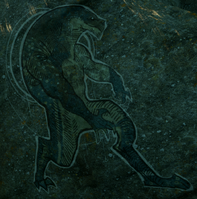 The same fresco at the Emerald Graves
Русский
Community content is available under CC-BY-SA unless otherwise noted.
Advertisement