The Royal Palace is the ancestral residence of the royal Theirin family, and the seat of power in Ferelden. It is also where the Landsmeet is traditionally held. Ferelden's throne is within the Palace's Landsmeet chamber.

In 9:10 Dragon, King Maric Theirin and Teyrn Loghain Mac Tir receives a group of Grey Wardens in the throne chamber. From Orlais, the Wardens are led by Genevieve, and are presented by First Enchanter Remille. They state that a Grey Warden who had knowledge of the location of the remaining Old Gods has been captured by the darkspawn and thus Thedas possibly faces the threat of a new Blight. That Grey Warden's last known location was Ortan Thaig. As the only known living persons to have reached the thaig are Maric and Loghain in 8:99 Blessed, the Wardens request that Loghain accompany them on their mission. When Loghain flatly refuses to help them find the lost thaig, King Maric surprises everyone and elects to accompany the Wardens himself.

Teyrn Loghain Mac Tir and his troops return to the Royal Palace from Ostagar, after the battle, in which he declares himself as Queen Anora's regent to the assembled nobles.

Finally, the new ruler of Ferelden will be officially coronated in the Royal Palace at the end of the Fifth Blight

There will be a duel between the Warden (or a champion chosen by the Warden) and Teyrn Loghain. Note that this fight cannot be avoided, and unlike all other companions, Alistair will immediately kill Loghain if he chosen to fight the duel.

If the Landsmeet outcome favors Loghain, or the Warden wins the argument but opts to attack Loghain rather than agreeing to a honorable duel, there will be an all out brawl within the chamber. Queen Anora's royal guards will assist whichever side Anora supported during the Landsmeet. Furthermore, the Warden's party will be joined by Redcliffe soldiers, the nobles who supported the Warden, and their soldiers.

Note: This fight is ended by the Grand Cleric when Loghain's health drops to very low levels. At that point the one-on-one duel takes place.
Note: When the health of a noble who assists you in this fight falls below a certain level, he or she will retreat from the chamber along with their troops.
───────

Before entering the Landsmeet chamber, the Warden will be confronted by Ser Cauthrien, if she was not killed during the Rescue the Queen quest. If Cauthrien is not persuaded to stand down, she and her contingent will attack: 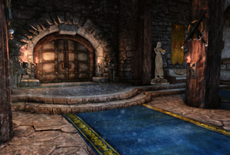 The Landsmeet Antechamber
Add a photo to this gallery
Retrieved from "https://dragonage.fandom.com/wiki/Royal_Palace?oldid=858755"
Community content is available under CC-BY-SA unless otherwise noted.