“The profane have lingered in this place for ages beyond memory, feeding on the magic stones until the need is all they know.”

Rock wraiths, also known as the Profane[1], are legendary creatures that inhabit certain sections of the Deep Roads.

Dwarven legends tell of dwarves so corrupt that even the Stone rejects them. Doomed to wander the Deep Roads in an undying half-life, these creatures are known as rock wraiths, and they are creatures of hunger, wrath and little more. This belief is also shared for other shades found in the Deep Roads, such as Phantasmal warriors and Forgotten spirits.

Those that speak of them tend to call them rock wraiths, though they seem to refer to themselves as the profane. This may be because they feel that they were abandoned, although it is unclear by whom. A poem found by a Helmi scrawled on the walls of Revann Thaig in the Exalted Age implies that when trapped or abandoned aeons ago, the profane "feasted upon the gods". The word profane literally means "outside the fane [temple]", i.e., contemptuous of a god or religion.[2]

These creatures are often mentioned in dwarven children's stories, where they abduct lost miners and cause cave-ins, scaring young dwarves into good behavior.[3]

While it's commonly held that Rock wraiths are myths, every so often a survivor, often half mad, staggers from the Deep Roads whispering of living rock assembling itself into a twisted shape shifting parody of a humanoid creature, and of baleful eyes glowing in the dark. They become even worse as they languish in the Deep Roads, feeding only on lyrium veins as their hatred for the living grows and grows.[4]

If a rock wraith lives for an exceptionally long time, it grows in size and power to become an ancient rock wraith. Though most rock wraiths wander in a roughly dwarven shape, the ancient wraiths have more control over their forms. Likewise, the mindless, raw emotion of a normal rock wraith turns into a sinister intelligence far more similar to how the dwarf thought in life.[4]

The lyrium that nourishes a rock wraith gives it a connection to the Fade, and makes it susceptible to demonic possession. Rage demons often inhabit the weaker rock wraiths, but more powerful demons yearn to possess any ancient rock wraith they can find. The rock wraiths rarely put up much of a struggle. Their desire for power quickly outstrips any caution they might have.[4]

A significant number of rock wraiths are encountered in the Primeval Thaig during the Deep Roads Expedition. A hunger demon in the form of a profane will ask Hawke to stop killing the profanes, as it feeds off their hunger, and to kill the ancient rock wraith which lies ahead, and in return, it will tell them the location of a key in order to escape the Primeval Thaig. 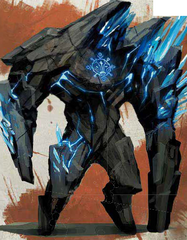 A rock wraith in the Dragon Age II Guide 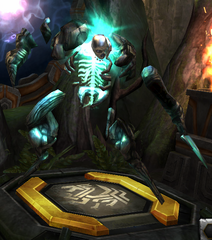 A Wintersend rock wraith in Heroes of Dragon Age