Ritts is an Inquisition scout stationed in the Hinterlands in western Ferelden.

Ritts can be encountered during the side quest Strange Bedfellows.

A scout north of the Dwarfson's Pass Inquisition Camp asks the Herald to investigate Ritts' absence. After catching up with Ritts and helping her take down the Templars attacking her she can be recruited as an agent for Leliana.

However the Herald must either be a dwarf, have Varric in their party, or possesses the Underworld Knowledge Inquisition perk.

Searching the area reveals that Ritts was with a mage that was tampering in blood magic. The Herald can either promote her from scout to covert agent, whereby Ritts' talents would be put to better use or inform the worried scout that she is safe and optionally tell him of her actions while she was on duty.

Note: If the confrontation with the attackers goes on for to long, Ritts will eventually get killed. If the path up the hill rather than the nearby tower is taken ambushing the attackers will allow for Ritts to potentially stay alive for the duration of the confrontation. If the quest is completed prior to recruiting Ritts, the option to recruit her as an agent will no longer be available. 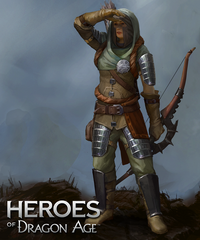 Ritts in Heroes of Dragon Age

Retrieved from "https://dragonage.fandom.com/wiki/Ritts?oldid=879294"
Community content is available under CC-BY-SA unless otherwise noted.