Repentance is an Act 2 companion quest for Sebastian in Dragon Age II. It requires The Exiled Prince downloadable content.

Note that this quest is not available until Act 2, even if Duty is completed during Act 1.

Speak to Sebastian in the Chantry and agree to help. (There will be a funny exchange with Varric after Hawke's first dialogue choice if he's in the party).

Travel to Hightown and enter the Harimann Estate. Sebastian will be locked into the party from this point forward. There are three chests with Complex-ranked locks in this quest (30 Cunning to open, 150 XP each).

There are enemies who employ spirit damage, thus a Rune of Spirit Warding in companion armor will reduce most of it. The design is available from Mage Goods in the Gallows as soon as Act 2 begins. All enemies have some form of elemental immunity on Nightmare difficulty, but the nature immunity of Undead and Revenants is counterbalanced by a weakness to spirit damage and vice-a-versa in the case of Shades, Desire Demons, and Arcane Horrors. All demons and undead are weak to electricity, save for Rage Demons, who suffer normal damage. They are immune to fire and weak to frost. Additionally, Revenants are immune to frost, but it works well against every other enemy encountered here, so an Elemental mage is highly recommended in spite of these resistances.

The journey through the mansion will pass without incident aside from a few cutscenes. The first is in the wine cellar, and the second in the parlor. Collect the Mail Undertunic from the chest in the parlor. In the hallway to the east, the quest continues to the south, but take a detour through the door upstairs to a third, amusing cutscene and a Complex-ranked chest. If Isabela or Varric is in the party, they will have some amusing comments. Merrill also has a comment.

The waypoint marker leads to another cellar to the south. After a cutscene with the Harimanns, and a battle with shades and a Desire Demon will follow. Defeat the Desire Demon first to keep her from buffing the shades, then focus on stunning them before taking them down one or two at a time. The Starkhaven Longbow (gift) can be picked up off a nearby dead Flint Company mercenary. Picking it up activates the companion quest The Starkhaven Longbow, which can be completed upon returning to the Chantry.

Enter the Underground Passage to continue the quest.

The layout of these ruins is similar to the "mining caves" from Blackpowder Promise, Wayward Son, and similar areas, only with the more ominous textures of the caves in Forbidden Knowledge. Thus, the same chokepoints will corral the enemies. In the tighter chokepoints they will not be able to get ahead of each other to even attack, making them easier to defeat.

The first battle features a rage demon and numerous shades. For some ease, head downstairs to draw a few of them plus the rage demon, then back upstairs to take them out as they come. Stun the rage demon and defeat it before it can "backstab" too much. The remaining shades will spawn down below, so engage them when you are ready.

The next fight is with a Revenant and a selection of corpses. Pull the Revenant into the previous chamber without aggro'ing the corpses for an easier encounter, then take them out, prioritizing the archers when they appear.

Down some steps to the north, two more rage demons attack at once. Retreat back upstairs if necessary and try to keep them from fighting together. Beyond them is a Revenant and an Arcane Horror, but they do not have to be fought together. Lure the Revenant to the previous chamber first and defeat it, then stun and rush the Arcane Horror before it can unleash a single AoE. Alternatively, rush the revenant with everyone and ignore the corpses, defeat it, then quickly turn attention to the Arcane Horror before it can fire a single spell. After the battle, go up the stairs to the west to find the Codex entry: The Demon's Gift and a Complex-ranked chest. Before entering the final room, there is roughly 4

(exact amount varies with level) in some rubble in the corner.

At the end of the ruins is Allure, a Desire Demon, and Lady Harimann, who is an Elite-ranked blood mage.

Allure says that Sebastian and Hawke both possess the desire for power.

Regardless of dialogue choices, they must be defeated, along with four shades. One method is to lure them back to the previous room and single-file them to be killed one at a time, or a little further so Lady Harimann and/or Allure give up their pursuit. Alternatively, Lady Harimann is easy enough to kill with a quick stun and four-on-one assault, and Allure doesn't have the durability of other "commander" style enemies, so retreat may not even be necessary. Simply kill Lady Harimann and the rest of the fight should fall into place.

Return to the estate via the nearby exit.

Flora Harimann will speak to Sebastian, apologizing profusely and swears to make amends for everything her family did, including helping Sebastian retake Starkhaven.

Return to the Chantry and speak to Sebastian to complete the quest. 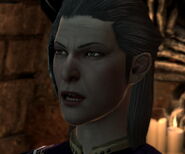 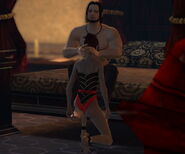 Flora Harimann, drunk in the cellar
Add a photo to this gallery
Retrieved from "https://dragonage.fandom.com/wiki/Repentance?oldid=856178"
Community content is available under CC-BY-SA unless otherwise noted.