Edit
watch 02:23
Wiki Targeted (Games)
Do you like this video?
Play Sound
“The Legion's pretty straightforward. We keep the darkspawn out of Orzammar. And we're sodding good at it.”

Legion of the Dead
Inquisition

Lieutenant Renn is a dwarven officer of the Legion of the Dead. Renn is a temporary companion during The Descent DLC.

Renn was a cobbler before he joined the Legion of the Dead to pay off his father's debts. It kept his mother and brother from losing their caste.

Now a lieutenant, Renn is known as a veteran of the Fifth Blight, although he waves off the notion, stating that he was a wet-nosed recruit and he never met the Warden personally. He does, however, maintain a healthy respect for their Order, stating that they are "a good bunch", fearless and good to have in a fight. He is reputed to be one of the Legion's finest commanders.

Three years ago, the Shaperate tasked him with protecting Shaper Valta during her search for dwarven relics in the Deep Roads. The two developed mutual affinity, although Renn is skeptical of Valta's theories. When the food riots started in Orzammar, Valta made sure his mother and brother were safe.

This section contains spoilers for:
Dragon Age: Inquisition.
The Inquisitor first encounters Renn and his men fighting darkspawn and helps them seal off one of the exits to the Deep Roads with lyrium explosives. Renn accompanies the Inquisitor, their companions and Valta on their quest to stop the earthquakes through the Darkspawn Warrens and the ruins of Heidrun Thaig. As they enter the natural caverns below the thaig, they are watched by blue eyes in the darkness. Renn dares the unseen watchers to show themselves, shortly before being shot through the chest by the Sha-Brytol. Renn manages to hold on until the attackers are all dispatched before succumbing to his mortal wound. He is buried according to dwarven tradition and Cole murmurs that "It sings softly under the silence. The Stone took him back. He's home again." However his grave site is subsequently disturbed, and his remains are now missing. 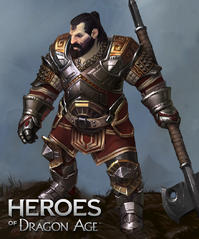 Artwork of Renn in Heroes of Dragon Age
Community content is available under CC-BY-SA unless otherwise noted.