“You should have left when you had the chance, Warden.”

The Human Noble Warden is only able to escape with Duncan's aid, which he gives only in return for becoming a Grey Warden.

With the castle secure, Arl Howe declares himself the new teyrn and reveals his political ally and lord, Teyrn Loghain Mac Tir. Unless the City Elf Warden executes the previous Arl of Denerim's, heir Howe uses his position to gain more power by kidnapping him and claiming the arling for himself while Regent Loghain depends more and more on Howe's political ability. By the time Lothering is sacked, Howe has become the most powerful person in Ferelden, after the regency.

Howe is responsible for many of the terrible events that happen during the Blight. Along with brutalizing the elves of the Denerim Alienage and imprisoning any loose ends that could threaten Loghain's rule, he imprisons Anora in his estate after she visits to inquire about the negative rumors about her father. He also tries to convince Loghain to murder his daughter and pin the crime on Arl Eamon, in the hopes of sullying Eamon's popularity at the Landsmeet. 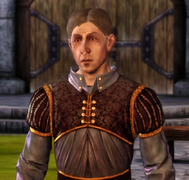