Arl Rendon Howe is an old friend of Teyrn Bryce Cousland and the Arl of Amaranthine. He is also the father of Nathaniel Howe, a companion in Dragon Age: Origins - Awakening.

During the Orlesian occupation of Ferelden, Rendon's father, Tarleton Howe, sided with the occupiers and was subsequently hanged by the Couslands after they captured Harper's Ford.[1] His uncle Byron became the new Arl of Amaranthine and joined the rebel cause in 8:97 Blessed. Like his uncle, Rendon Howe joined the rebellion led by the future king, Maric Theirin. [2] He fought alongside the young Bryce Cousland of Highever and Leonas Bryland, future arl of South Reach, at the bloody Battle of White River. The battle was the most catastrophic defeat of the entire occupation, from which only 50 rebel soldiers escaped alive. Rendon fought with the Army of the North led by Bann Angus Eremon, tasked with holding the valley against the Orlesian cavalry's charges. He was gravely wounded on the second night and had to be dragged off the field by Bryce and Leonas. When Bann Angus finally announced the retreat, Rendon's friends carried him to a freehold in Redcliffe. While the rest of the survivors left to find the Army of the South, Bryce and Leonas stayed with Rendon almost a month while he recuperated. Though all three were personally decorated for valor by King Maric, Rendon was too wounded to rejoin the army, and while his friends joined the Army of the South, he spent months in South Reach being tended by Eliane Bryland, Leonas' sister and an accomplished physician and herbalist.

Byron Howe died just a few months later, which made Rendon the new arl. Eliane Bryland insisted on accompanying him to Amaranthine; he proposed to her a year later, saying that if she wasn't going to leave already they might as well marry. Leonas had become concerned by the changes in his friend's behavior since the battle and attempted to prevent the marriage. When Rendon told him that he needed her for dowry and connections, he severed all contact. Because some believed the arling should have passed to Byron's daughter, and because Eliane was half-Orlesian, only Bryce Cousland and his fiancee came to witness their vows.[3] They had three children Nathaniel, Thomas, and Delilah. According to their son Nathaniel, Rendon hated his wife; when asked why, he says that he doesn't know, but he remembers that her family was wealthy.[4]

Since the Battle of White River, Howe's abrasive manners have earned him almost universal dislike among his peers.

The Human Noble Origin begins with Arl Howe's arrival at Castle Cousland in Highever. Howe explains to Teyrn Cousland that his troops have been delayed, and that he will march with them when they arrive. Teyrn Cousland then tasks his eldest child, Fergus Cousland, with leading the Cousland forces ahead to Ostagar, where they have been called by King Cailan Theirin to fight against the darkspawn.

The Human Noble Warden is only able to escape with Duncan's aid, which Duncan gives only in return for recruiting them into the Grey Wardens.

With the castle secure, Arl Howe declares himself the new teyrn and reveals his new political ally and lord is none other than the Teyrn of Gwaren, Loghain Mac Tir. Unless the City Elf Warden kills the previous Arl of Denerim's heir, Howe uses his position to gain more power by kidnapping Vaughan and claiming the arling for himself. Meanwhile Regent Loghain comes to depend more and more on Howe's political ability. By the time Lothering is destroyed by the Darkspawn, Howe has become the most powerful person in Ferelden, after the regent.

Howe is responsible for many of the terrible events that happen during the Blight. He is shown to be a cruel and iron-fisted ruler as he gains land holdings and titles; in Denerim and Highever alike people mention suffering under his heavy taxation and harsh treatment from his guards, and the dungeon at his Estate is full of tortured prisoners; his brutality earns him the sobriquet "The Butcher of Denerim", his ill reputation becoming notorious as far as the Free Marches. Rendon Howe has even avoided paying his workmen for their services, causing a crowd of his workers to gather outside his Denerim estate to demand their remuneration.[5]

Along with brutalizing the elves of the Denerim Alienage and imprisoning any loose ends that could threaten Loghain's rule, he imprisons Anora in his Denerim estate after she visits to inquire about the negative rumors about her father. He also tries to convince Loghain to murder his daughter and pin the crime on Arl Eamon, in the hopes of sullying Eamon's popularity at the Landsmeet and is also implied to be embezzling funds from Denerim's treasury behind Loghain's back.

However, his plan goes awry when the Warden is enlisted to rescue Anora from her captivity. While doing so, the Warden tracks Howe to the dungeons of his estate and kills him and most of his men-at-arms. He dies cursing the Warden, lamenting that he "deserved more." 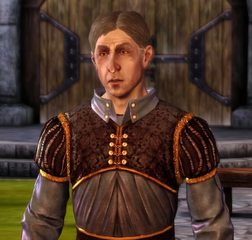 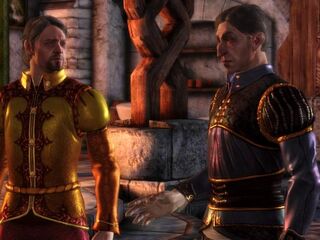 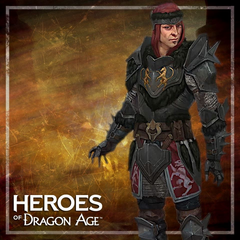