Red lyrium is a more potent and more addictive form of raw lyrium.

Red lyrium is typically found in crystalline form, as with normal lyrium. It is known to thin the Veil, allowing spirits or more likely demons to interact with the physical world[2], and emanates a noticeable heat.[3] Where it was originally found, red lyrium grew in root-like veins[4], again like normal lyrium. The dwarves of the Mining caste with millennia of experience and expertise on finding and mining lyrium had never encountered this type of lyrium before.[5]

However, following the opening of the Breach, it began appearing throughout the surface of all of Southern Thedas in crystalline nodes. These crystals grow almost anywhere, though the composition of the earth can affect their growth[6]. Regardless, it grows over the landscape like an infection, and once it takes root, it becomes extremely hard to completely remove. The chances of even dwarves removing it completely from Emprise du Lion, one of the hardest hit locations, is stated as being 0.014%.[7]

Unlike normal lyrium, red lyrium doesn't require a dwarf to mine, and does not require any dilution or ingestion to affect people. All that is required is to be near the mineral.

Bianca Davri discovered that the red lyrium is actually regular lyrium tainted by the Blight, which only affects living things, confirming some scholars' beliefs that lyrium is in fact alive.

Prolonged exposure to red lyrium induces gradual psychological and physical change, though not as quickly as direct use or consumption will[8]. Drawing upon too much red lyrium too quickly accelerates the process, outright dooming the user either to roaring madness and death[9][10][6] or petrification by lyrium[11]. Red Templars tell they have to "use it enough so that it changes [them], but not so much that it destroys [them]."[6]

Depending on the individual, someone can endure years of exposure without any perceivable effect, as is the case with Meredith Stannard[12], or be largely immune to its debilitating effects so long as they don't go into withdrawal, as with Raleigh Samson[13]. However, both of these individuals were Templars, and it's possible that their immense willpower, Templar training, and previous experience with untainted lyrium slowed the speed at which the red lyrium corrupted them. Further compounding this, the Seekers of Truth have shown to be largely immune as well, though it can still poison them if ingested in fatal amounts[14].

When templars ingest red lyrium, it improves their powers, grants them new ones, and pushes their strength to superhuman levels[9]. Even the average red templar outclasses a normal man. A few red templars can fight a group several times their number to a standstill[15], and shield bearers swing full metal tower shields with ease[16]. In perhaps the most extreme case, a specific red templar said he could march for days without rest and break a man like kindling[17].

Thousands of years before present day, before even the rise of darkspawn, House Valdasine single-handedly supplied lyrium to the rest of the dwarven empire. One day however they shut the doors and did not open them to anyone, not even to a visiting Paragon. After days of silence the doors were finally opened but did not find anyone inside, not even evidence of what had transpired. They only found a red lyrium idol that was purportedly worshiped and a staff of strange metal which looked like lyrium. In response, the dwarven king ordered the idol and the staff to be left inside and sealed the thaig. Such was the danger, that the existence of the thaig was stricken from the Memories so that it would be completely forgotten.

In 9:31 Dragon, an expedition into the Deep Roads rediscovered this thaig using old Grey Warden maps. The expedition was led by the two dwarven brothers Bartrand and Varric Tethras and the human Hawke. While exploring the thaig, Hawke and Varric found the idol. When they showed it to Bartrand, he betrayed them and stole the idol intending to sell it for a fortune and left them to die. Still further in the thaig Hawke encountered the Profane, rock wraiths that feed on red lyrium claiming that they "feast upon the gods".[30] In the following years, as a result of prolonged exposure to the red lyrium idol, Bartrand gradually succumbed to insanity.

Bartrand eventually sold the idol to Knight-Commander Meredith Stannard who forged a sword from it. Exposure to the red lyrium within her sword fueled her paranoia until she became corrupted by its power and died during the Kirkwall Rebellion in 9:37 Dragon, petrified in red lyrium after a failed attempt to draw more power from the sword.
This section contains spoilers for:
Dragon Age: Inquisition.

In the aftermath of the destruction of the Temple of Sacred Ashes, red lyrium began appearing all over southern Thedas. A splinter faction of the Templar Order, calling themselves the Red Templars, begin to consume red lyrium, corrupting their bodies and transforming themselves into monsters. Autopsies on Red Templar corpses has shown their relationship with the red lyrium is parasitic; the red lyrium essentially "eats" the Templar from the inside out as it grows. The process is described as incredibly painful and demands a careful balance between allowing the Lyrium to change the person so that they can manipulate it, but doing so careful enough that they are not immediatly consumed and lost to madness.[6]

According to Bianca Davri's research, red lyrium contains taint. This proves that lyrium is alive as only living things can be tainted.[31] Red lyrium can also "infect" the landscape and grow into massive deposits.

Lord Seeker Lucius Corin discovered that Seekers of the Truth are immune to red lyrium thanks to having their minds touched by a spirit of Faith during their vigil. To counter this, he force-fed the Seekers captured by the Order of Fiery Promise red lyrium, resulting in the characteristic red veins in their skin, until they died or gave in. 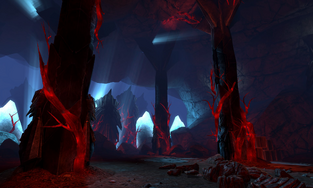 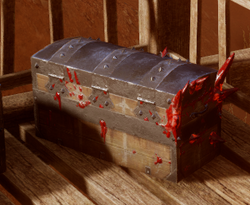 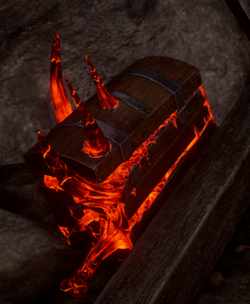 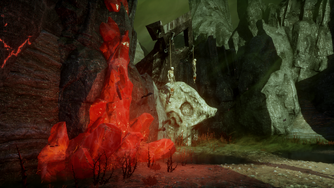 Red lyrium in the Fade