“The new world! The new god! The red storm will rise!”

Red Templars are a splinter faction of rebel Templars who have become corrupted by the use of Red lyrium.

Following the disappearance of Lambert van Reeves, Lucius Corin succeeded him as Lord Seeker of the Seekers of Truth and continued to lead the Templar Order in the Mage-Templar War.

With the Mage-Templar War wreaking havoc across Thedas, Raleigh Samson was able to rally some of the floundering Templar Order and was made their general. Samson had begun serving Corypheus and introduced his Red Templar Order to the Red Lyrium he supplied. Samson inspired his fellow Red Templars to master the red lyrium with the sole purpose of overthrowing the Chantry that cast them aside and to make the world a place free of the Chantry's oppression.[1]

Unbeknownst to the Templars and other Seekers, Lord Seeker Lucius decided to abandon his duties entirely and took over a cult obsessed with the Seekers: The Order of Fiery Promise. Lucius formed an alliance with Corypheus and willingly supplanted himself with an envy demon to control the Templars. Posing as the Lord Seeker himself, the Envy demon introduced Red Lyrium to the templars at Corypheus' behest, claiming that it was superior to the standard lyrium which the Chantry had supplied. Thinking that red lyrium was just another tool, the templars followed the Lord Seeker's order. The officers of the Templar Order were corrupted first and they in turn began corrupting the rest of their subordinates, by force if necessary. Soon, horrific physical changes began to emerge and red lyrium veins begins to manifest on the skin of those exposed. Thus the Red Templar order was born.

The exact amount of direct control that Corypheus exerts over the Red Templars is unknown. Since red lyrium is lyrium afflicted by the blight, it can be presumed that it left them completely under Corypheus' control, due to his ability to manipulate any who carry the Darkspawn taint. Others, like Samson, are largely immune to its effect, but serve Corypheus nonetheless, out of personal devotion and belief in his goal. If Corypheus does exert control, it seems to not be absolute in the manner he controlled other tainted beings, like Grey Wardens, since many documents found by the Inquisitor speak of occasional unrest and dissatisfaction within the Red Templar ranks, as well as a rivalry with the Venatori, a cult of mages devoted to Corypheus. The journal of one Red Templar in Suledin Keep even tells that he regrets taking the Red Lyrium and even considered a deal with one of the Forbidden Ones, Imshael, to be cured of it.

The Red Templars themselves were unlikely to live very long as the red lyrium they ingest slowly eats away at their bodies and destroy their minds until he or she later dies in agony.

In the wake of the Breach into the Fade at the Temple of Sacred Ashes which obliterated the conclave and much of the senior Templar leadership, the Envy demon took a large contingent of Templars and had them garrison themselves at an abandoned Seeker fortress, Therinfal Redoubt, where the corruption of the remaining Templars under its command could continue uninterrupted.

Notes found in Therinfal Redoubt's officers' quarters proved that the templar officers stationed there willingly infected half their knights with red lyrium even before they discovered that an Envy demon has been posing as Lucius Corin.[2] These officers appear to be members of General Samson's Red Templars and were complicit in not only corrupting their subordinates, but also in the assassination of Knight-Vigilant Trentwatch.[3][4]

According to Delrin Barris, the commanders of Therinfal Redoubt's templars often gave their subordinates new kinds of lyrium to consume and they drank the red lyrium first to show that it was harmless. None of the subordinate templars would question their leaders and thus many of the rank and file followed suit.

If the Inquisition recruits the Templars:
With the backing of ten influential houses of Orlesian nobles, the Herald of Andraste approaches the Templars gathered at Therinfal Redoubt to secure their aid in closing the breach. The offer of alliance from the Inquisition spreads dissent among the Templars there, with many speaking out against the Templars' withdrawal while the breach threatens Thedas. Fearing they are losing control of the situation, the Red Templars led by Knight-Captain Denam attempt to slaughter all the non-corrupted Templars at the fortress. Led by the Herald of Andraste and Ser Delrin Barris, the remaining Templars expose Envy's true identity and a pitched battle erupts between the Templars and Red Templars. Eventually, the Envy Demon is killed and the Red Templars at Therinfal Redoubt are defeated.

With their ranks thinned by their failure to corrupt the other Templars at Therinfal as well as the many Red Templars slain in the battle, Corypheus elects to use the Venatori to assault Haven instead.

The Red Templars continue to further Corypheus' agenda in both Orlais and Ferelden. The Red Templars establish a hidden port on the Storm Coast in north-eastern Ferelden to enable rapid transport across the Waking Sea. They also aid the Freemen of the Dales- deserters turned bandits from the Orlesian Imperial Army who have abandoned the War of the Lions- by giving them supplies in exchange for their aid in harassing refugees, Orlesian soldiers and Inquisition forces in addition to transporting and storing Red Lyrium throughout the Emerald Graves. Eventually the Freemen are attacked by the Inquisition. Knight-Captain Carroll attempts to re-establish contact between the Red Templars and the Freemen but is lured into a trap by the Inquisitor and is slain.

Red Templar patrols are also deployed to the Hissing Wastes to help protect the Elder One's research teams there.

The Red Templars also establish a major presence in Emprise du Lion, seizing Suledin Keep as their primary base of operations. They purchase the local quarry and then intimidate Mistress Poulin to hand over the local villagers from Sahrnia in order to mine and grow more red lyrium. The Demon Imshael somehow ingratiates himself with the Red Templars at Suledin Keep and supervises the project to infect Giants with red lyrium which successfully results in several corrupted Giants. Eventually the Inquisition launches a sustained assault driving the Red Templars out of the region and seizing the Keep.

After suffering several other major setbacks, the Red Templars launch an invasion of the Arbor Wilds at Corypheus' behest, hoping to seize the Temple of Mythal and the Well of Sorrows. The Red Templars are drawn into a protracted battle against the combined forces of the Inquisition, the former Circle of Magi, the Orlesian Army and the mysterious Elven Sentinels guarding the Temple. After taking heavy casualties, the Red Templars successfully breach the Temple, but Samson is confronted by the Inquisitor personally and captured.

With their leader imprisoned and their supply of red lyrium cut off, the remaining Red Templars are left broken and scattered.

The Red Templars have adopted a more military approach to ranks within the organization and have removed the prefix "Knight" from the title. However, there are a few in the order that still prefer to have the "Knight" prefix included in their title.

Thanks to the powers of Red lyrium, all Red Templars possess enhanced speed, strength, stamina and healing capability. At more advanced stages of corruption, they are able to 'sow' red lyrium deposits into the soil. Behemoths for example, are capable of sowing red lyrium into the soil; causing it to burst out of the ground when they strike the floor and thus creating a barricade of red lyrium to trap their prey.

Red Templar Horrors are also able to create and expel red lyrium crystals at high velocity from their bodies and spew red lyrium in gas form. Horrors are able to "spit" consecutive red lyrium shards from their palms for straight shots and a barrage from their back for an arc shot. The Horror can also charge the crystals on their backs in order to emit a red electrical mist that engulfs their surroundings, and makes anyone that comes in contact with the mist feel a raw lyrium exposure-like sickness.[5] Horrors will stop spitting crystals and instead use the electrical mist to weaken their foes as they engage in melee combat. Their "tell" for when they are about to emit the red electrical mist is when they wring their heads and writhe, their red lyrium-lumped backs pulsating and emitting a dark red gas until they eventually explode with red energy.

Red Templar Knights are able to channel a current of red lyrium lightning to other Red Templars in order to accelerate the speed of their corruption; thereby transforming them into Horrors almost instantly. Knights are also able to use this ability to further enhance the strength and endurance of other Red Templars. Knights can also shoot a singular red lyrium shard from its hands that can stagger opponents when it hits. While both Horrors and Knights eschew traditional weaponry in favour of their bare hands and claws, Shadows have taken it further and their forearms have actually transformed into giant spikes of Red Lyrium, allowing them to slice into their enemies. Shadows can also fade from view and are also adept at using ambush tactics.

Note from a Templar 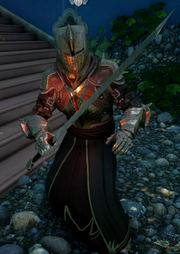 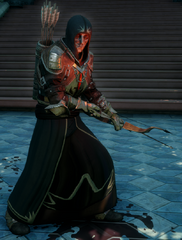 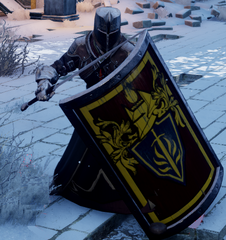 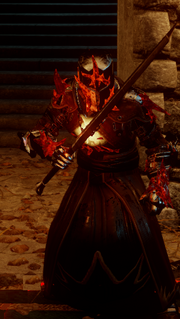 Red Templar in an advanced state of corruption 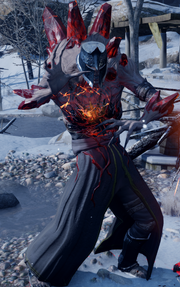 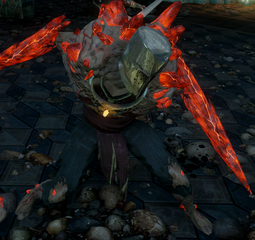 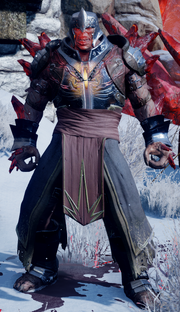 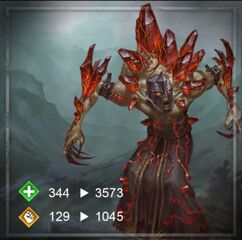 Artwork of a Red Templar Horror in Heroes of Dragon Age 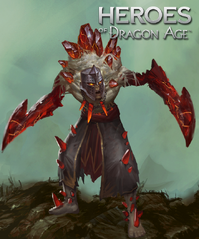 Artwork of a Red Templar Shadow in Heroes of Dragon Age 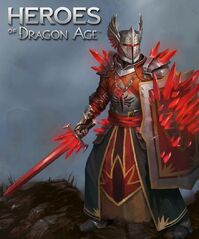 Artwork of a Red Templar Knight in Heroes of Dragon Age

Tiers of a Red Templar Archer in Heroes of Dragon Age