Demonic spirits teach more than blood magic. Reavers terrorize their enemies, feast upon the souls of their slain opponents to heal their own flesh, and can unleash a blood frenzy that makes them more powerful as they come nearer to their own deaths. 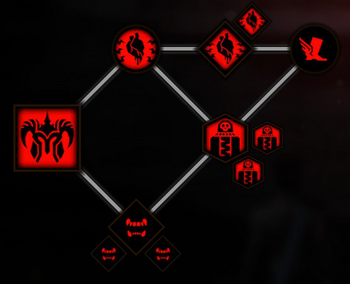 This Reaver might not be as powerful as it seems. Most talents of the Vanguard tree are at least equally powerful, but are way more reliable. The combined damage boost of Might and Cleave might be higher than the bonus granted by Blood Frenzy and Sacrificial Frenzy. The regular area damage of Aura of Pain might be less impactful than Assail plus Besiege.

So the easiest way to play a Reaver is to simply combine the Reaver and Vanguard talents for a maximum damage output. You'll be able to dish out tons of damage just with basic attacks alone. Activating Cleave right before you use Devour might be enough to fully recover your hitpoints and the deathblows caused by Massacre will trigger Fervor faster and more frequently.

Alternatively, a Reaver can be played as a sort of tank. Aura of Pain not only deals regular damage, it also generates threat automatically. Using other threat-increasing talents like Taunt, Bravery or Battle Synergy, will ensure that most enemies engage the player.

Due to the fact that Devour recovers three times the amount of hitpoints should the player hit a disoriented foe, it's highly recommended to bring a rogue along. A Fatiguing Fog (plus the Overpowering Fog upgrade) not only helps to trigger the additional life-stealing effect, the 50% loss attack speed also helps to avoid taking too much damage.

Last but not least: Always try to use a Hex of Torment (plus the Death Hex upgrade) right before you use Devour.

Retrieved from "https://dragonage.fandom.com/wiki/Reaver_(Dragon_Age_II)?oldid=883811"
Community content is available under CC-BY-SA unless otherwise noted.