The Dragon of Mystery

Razikale, the Dragon of Mystery, is one of the Old Gods, ancient draconic beings said by the Chantry to be imprisoned underground by the Maker for usurping His worshipers. The darkspawn have not yet discovered Razikale, thus, the old dragon still slumbers somewhere in the underground of Thedas.

Razikale is the Tevinter Dragon of Mystery. Worshiped by the Tevinter Imperium of old like her siblings, she is an enormous draconic figure of immense power. The current Circle Tower in Minrathous was once a Temple dedicated to this Old God.[1] There was also a temple called Razikale's Reach in the Frostback Basin. In ancient Tevinter, it was thought that the waters of Lake Calenhad carried the blessing of the Dragon of Mystery,[2] and the constellation "Eluvia" was associated with her.

Like the other Old Gods, Razikale endorsed the ancient Tevinter Magisters' attempt to reach the Golden City and spoke to the High Priest of Razikale, who used the alias "The Augur of Mystery", and told them to join in the endeavour. [3]

During the War against the Elder One, it was widely believed that the red lyrium dragon was the next archdemon, though this was disproved later on when no darkspawn horde was seen massing alongside the Venatori and the Red Templars under Corypheus. Thus, only Razikale and Lusacan have yet to be corrupted by the darkspawn as all the other Old Gods have been awakened, corrupted and eventually defeated in the previous five Blights.

There is a number of ancient Tevinter writings dedicated to Razikale inscribed on the ruins of her temple and other structures in the Frostback Basin. The writings are not included in the Codex.

To She Who Winds the Skein of Wisdom, we dedicate this citadel.
Dragon of Mystery, bestow upon your faithful servants your ineffable truth.
Grant us eyes to pierce the darkness and souls to bear the wounds of your labyrinth.

Silence has fallen.
Those who call out to her in dreams hear nothing.
Our letters to the capital go unanswered. No supplies have been sent, and our messengers do not return from the north.
We are alone.
Razikale, O Shadow Which Obscures the Path Ahead, deliver your faithful, save us from the silence which devours.

Dragon of Mystery, return to us, we beg you.
Your servants falter.
The paths ahead are lost in darkness, and those who walk them find only ruin.
Those who should guide us instead wage war upon each other, vying for a throne that does not exist.
The blood of the sacrifices that seeps into the stone here shall be the only truth we reveal in the end.

Tevinter Carving in the Old Drains[]

If the Imperium has fallen, we shall build it anew.
This citadel shall be a new Minrathous, and we who serve the Twisted Path shall be its Magisterium.
Praise be to Razikale—may our raised voices reach her and bring her back to us at last.

Run if you can. Madness has filled the silence. Do not return to this place. 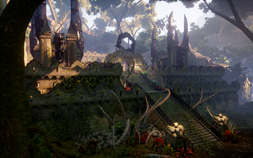 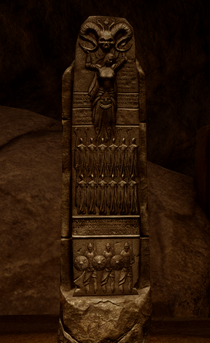 Idol depicting worshippers of Razikale engaged in a religious ceremony.[4]