“Templars have always been used. How many were left to rot, like I was, after the Chantry burned away their minds?”

Dragon Age II:
Wayward Son
Best Served Cold
Inquisition:
In Your Heart Shall Burn
Before the Dawn
What Pride Had Wrought
Sit in Judgment of General Samson

Raleigh Samson is a former Templar from Kirkwall, turned beggar.

Samson used to be part of the Templar Order before Meredith became Knight-Commander. According to Samson, the preceding Knight-Commander, Guylian, personally gave him his sun shield. He was later dismissed from the Order by Meredith after she caught him delivering messages between a young mage named Maddox and his lover in Kirkwall. He then turned into a beggar, and helped smuggling young mages out of the Circle in order to earn money, which he would spend on lyrium.

Samson has been addicted to lyrium for years, and has been suffering from withdrawal. He states that the Order isn't forcing Templars to stay, but, as the Chantry controls the lyrium trade, leaving means losing their primary source of lyrium.

Samson can be found in Lowtown during the night, near the entrance to Darktown.

Samson is involved in the quest Wayward Son. Whilst searching for Feynriel, both Vincento and Thrask will tell Hawke about Samson: a retired Templar who, according to them, aids mages out of guilt. Samson discloses that the boy didn't have a penny on him, so he sent him to Captain Reiner who has been known to take on refugees from time to time, and may be holding him captive. He mentions Hawke might find him at a warehouse by the Docks at night.

Back from the Deep Roads, a conversation with Samson triggers when speaking to him, where he'll ask Hawke to share their newly acquired fortune with him. Afterwards, he rambles about his past and how he ended up where he is.

Samson and Hawke meet again several years later in 9:37 Dragon during the quest Best Served Cold. Samson is part of Thrask's conspiracy to oust Meredith from her post. Hawke encounters Samson in passing while looking for the group that has kidnapped one of their allies. Samson admits to having joined the conspiracy to unseat Meredith, but is beginning to doubt whether or not the Knight-Commander may be right in her beliefs, at which point Hawke can tip the balance in favor of either sides. Samson leaves Hawke to confront the conspirators. Meanwhile Samson brings Knight-Captain Cullen to break up the renegades. Depending on Hawke's recommendation, Cullen will permit Samson to become a Templar once more if Hawke requests that he give him another chance.

Alternatively if Hawke suggests Cullen execute the mages, Cullen will state that Samson will likely be killed as well, but this may not occur. If the Inquisitor sides with the mages, Samson will be Corypheus' lieutenant regardless of what happens during Best Served Cold and if they side with the templars, his fate is unknown, but again not dependent on the events in Dragon Age II. Indeed, after the events of Legacy, Hawke mentions in their journal that they sighted a person — that appeared to be Warden Larius/Janeka — having a discussion with Samson. When Hawke attempted to approach them, the two avoided Hawke by disappearing into one of Lowtown's intricate shantytowns.

If Samson rejoins the Templar order, he can now be found at the Templar Hall and will remark that he's happy to have, "all the lyrium that [he] can quaff" and will fight alongside Hawke against Meredith.

Note: This story takes place after the events of Dragon Age II and just before Dragon Age: Inquisition.

In the aftermath of the incident at the Gallows and the collapse of the Kirkwall Circle of Magi, Samson rescued his friend Maddox, the very mage who got Samson discharged from the Templars for passing messages on behalf of him and his lover and had become a Tranquil. With the Mage-Templar War wreaking havoc across Thedas, Samson was able to rally some of the floundering Templar Order and was made their general. Samson had begun serving Corypheus and introduced his Red Templar Order to the red lyrium he supplied. Samson inspired his fellow Red Templars to master the red lyrium with the sole purpose of overthrowing the Chantry and take their revenge for controlling them by lyrium addiction and using them for their dirty work.

Samson was one of the first of the high-ranking Templars who were infected with the substance but was acutely aware of and complicit in Corypheus's actions. Samson willingly infected his subordinates, knowing that he was rotting their minds and warping their bodies. He himself, however, was found to be largely immune to the red lyrium's debilitating effects, sparing his mind while still gaining its benefits. During this time, Corypheus began outfitting Samson with equipment befitting his second-in-command. He reforged the red lyrium blade of the late Knight-Commander Meredith Stannard, which was dubbed Certainty, for Samson to wield.[1] With the aid of Maddox, Corypheus also fashioned a unique suit of red lyrium armor which drastically increased Samson's physical abilities and allowed him to manipulate red lyrium physically.

In the aftermath of the battles at Haven, Samson continues to advance Corypheus' agenda and pays particular attention to ensuring the supply of red lyrium is maintained, keeping careful tabs on the Red Templar officers in charge. He also is careful to issue as much medicine as is needed for Templars suffering from the myriad of painful side effects of the red lyrium, to ensure they do not suffer. Samson eventually chooses the Shrine of Dumat as his personal base and sets up Maddox and a contingent of Red Templars there to research ways to manipulate red lyrium further and improve his armor.

If the Inquisitor investigates Samson:
At Cullen's suggestion, the Inquisitor tracks down Samson's base at the Shrine of Dumat and personally leads a raiding party along with Cullen to attempt to capture Samson. However, the Inquisition forces are spotted as they approach the Shrine and Samson flees. Meanwhile, Maddox and a group of Red Templars remain behind to delay the Inquisitor and attempt to destroy any information which could potentially be used against Samson and the Red Templars. Maddox then takes his own life to prevent himself from being used against Samson. The Inquisition recovers the tools Maddox used to forge Samson's armor and from them Dagna can reverse-engineer a rune that can disable the armor.

After the failures at Adamant Fortress and the Winter Palace in Halamshiral, Corypheus decides his only option is to seize the magical knowledge of the Well of Sorrows at the Temple of Mythal in the Arbor Wilds. Corypheus deploys the bulk of his remaining forces to the Wilds. Led by Samson, they engage in a pitched battle throughout the Wilds against the Inquisition, the former Circle mages, the Imperial Army of Orlais, and the Elven sentinels guarding the temple. Samson, however, orders his troops to disregard the opposition as much as possible and that their priority is to reach the Well of Sorrows in the Temple at all costs. Samson encounters the Inquisitor in person at the Temple entrance as he storms the gates with a platoon of Red Templars, gleefully sneering as they blast open the Temple's inner sanctum.

Samson and the Red Templars with him fight their way through the Temple in close combat with the elven guardians and eventually comes face to face with the Inquisitor beside the Well of Sorrows. Samson reveals that he has been chosen by Corypheus to drink from the Well, becoming "The Vessel" of its knowledge for Corypheus, since his armor has made him "a fortress both in mind and body." If informed of Maddox's death, Samson momentarily loses his composure, remarking mournfully that his friend "died as one of us, one of the faithful..."

Samson attempts to kill the Inquisitor once and for all. If the rune was acquired, Samson's armor may be disabled. Otherwise, the Inquisitor and their companions face him at full strength. After the battle, Samson is defeated and taken prisoner by Inquisition troops.

The Inquisitor can later elect to Bring Samson to Skyhold for Judgment.

At his trial, Samson defends his actions as merely feeding his troops the same lies that the Chantry fed both him and them: "Hope instead of Despair" and "pain for purpose." Samson believed that Templars have always been used and that he was providing the Templar Order a mercy by having them go out in a blaze of glory instead of letting them be thrown away by the Chantry as soon as the lyrium destroyed their minds. Samson remains wanted for criminal charges in both Kirkwall and Orlais as well.

The Inquisitor has the options of:

If the Inquisition recruits the Templars...
Samson's fate is unknown; however, a letter to Calpernia states Corypheus no longer has Samson to lead the Templars. Corypheus' memoirs also mention that Samson "has failed" although they do not elaborate on his exact fate.

Before the Dawn (conditional)

What Pride Had Wrought (conditional) 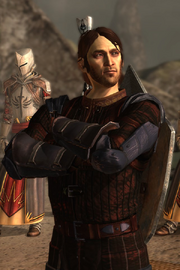 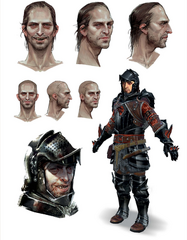 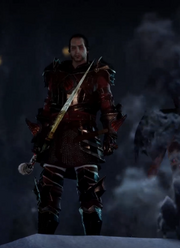 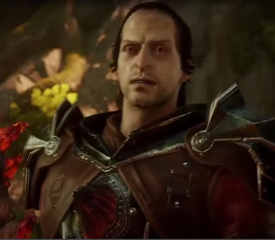 Samson after joining the Red Templars 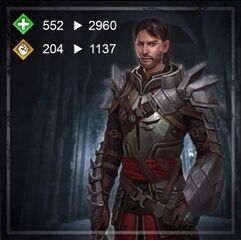 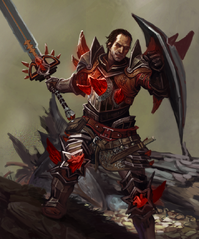