Qunlat is the Qunari language.[1] As a rule Qunari have little use for communication beyond its necessities. When speaking to those who do not follow the Qun, their statements are often laconic, with a kind of underlying condescension. Metaphor is an integral part of the language, and words usually have multiple meanings depending on context.[2]

Few among the Qun's people speak the common tongue, and fewer speak it well. In a culture that strives for mastery, to have only a passable degree of skill is perhaps embarrassing, so Qunari often keep quiet among foreigners. They have a reputation for never volunteering for conversation with strangers, and few outsiders ever hear them speaking among themselves.[3]

Phrases spoken by soldiers at rest, loosely translated by Philliam, a Bard!.[32] 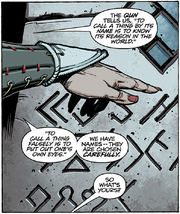 Rasaan explains why she wants her prisoner's name