This article contains strategies on how to defeat Queen of the Blackmarsh during the quest The Lost Dragon Bones in Dragon Age: Origins - Awakening. 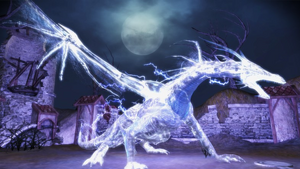 The Queen of the Blackmarsh is a slightly difficult encounter if you do not understand the fight is broken up into two main phases. The first being the Queen acting as a basic dragon. In this form, she is resistant to lightning attacks, and has the basic tail knockback that affects anything behind her, a back leg kick that does decent damage to players close to her tail, but on her side, that also knocks them back, as well as a lightning breath attack that targets anything in front of her. The second phase involves several floating orbs of lightning arranged in a circle around the Queen, who has taken on an orb form herself that is still attackable, but is immune to critical hits/backstabs. While in this form, she will not cause any damage to the player and their party.

The lightning balls should be killed as quickly as possible, as when they reach the center of the circle, where the Queen is, they heal her for a decent amount (up to 350 each on Nightmare). The Queen enters the second phase three times: when she reaches 75%, 50%, and 25% health.

Charged Wisps can be frozen, stunned, and paralysed. Rain of Arrows may be a solid choice, but only once they are close enough together around the Queen. It is advisable to have all characters set to take a health poultice when health gets low, and to have any mages standing far enough away to avoid the dragon's attacks, but close enough to jump in and start killing the lightning balls when they appear.

The Queen of the Blackmarsh has the following known attacks and abilities:

Tanks might consider using the Stormchaser Armor Set, as it grants 80% Lightning Resistance and a decent amount of dexterity and armor. However, it is heavy armor, and therefore has less armor than conventional tank gear.

+60% electrical resistance for 180 seconds will greatly mitigate the Queen's damage.

You can easily kill the Queen if you have enough sources of immobilisation, such as a mage alternating Force Field and Paralyze. When she goes into her second form with the Charged Wisps, a well timed Mass Paralysis will immediately immobilise all of the wisps. Use this time to kill the wisps, leaving one wisp alive which you will immobilise. As long as the remaining wisp does not reach her she will remain in her lightning ball form forever, susceptible to damage but not dangerous to the party. Although it may take a while it is a guaranteed way to kill her, provided you can get past her first dragon form. As long as you don't run out of mana you can keep this up forever.

To get the Queen in to Orb State you can have the mages alternate Force Field on a main tanking character once that character has the Queen's attention. As long as the mages or archers don't cast spells and just use a standard attack she normally stays focused on the tank. Make sure your other characters keep a good distance away from her tail and lightning breath. It take a while to whittle her down this way but generally limits damage for lower level groups. Bring mana potions to make sure you don't run out.

For this strategy to work the party will need to have both very high damage on the dragon form as well as very high damage on the orb from of the Queen. The dragon form is highly susceptible to backstabs and one very good source of damage is a dual wield rogue with maximum or close to maximum swing speed and critical damage modifier. The orb form is most susceptible to archers and spirit warriors, both deal high damage per strike without hitting critically. Spirit Warriors that have Soulbrand also deal spirit damage, attack quickly, and ignore armor.

As an alternative to killing the orbs, mages who possess Curse of Mortality may simply cast it on the Queen just as the Wisps begin to reach the centre. Should the Queen be unable to resist the spell, the Curse will effectively nullify the Wisps' healing abilities.

A team of 3 or 4 archers with high dexterity and Accuracy will make light work of the Queen. It's entirely possible to kill her in under 1 minute on Nightmare difficulty using this strategy. The Manual of Focus will be required to respec Sigrun and either Justice or Oghren into archers and one to tweak Nathaniel to focus on very high dexterity. Dragonspite is a very helpful bow here.

A mage with the Arcane Warrior and Battlemage specializations can beat the Queen by himself, on any difficulty. You can equip the Stormchaser armor set, use Combat Magic, Shimmering Shield, Draining Aura, and Rock Armor and Arcane Shield, too, if you have them, but those aren't strictly necessary. With Shimmering Shield and Draining Aura active, your mage will be almost invincible because as the Queen does damage to you, Draining Aura constantly heals you. Shimmering Shield ensures the damage doesn't become too much for you to handle. If you have the Soldier's Peak DLC and acquired the Power of Blood abilities, Dark Sustenance is very helpful for replenishing mana, but if you don't have it, just bring plenty of Lyrium potions, and you'll be fine. Otherwise, just do non-elemental damage with your best sword; when the wisps come, use any paralysis or freezing spell to give yourself time to defeat them before they heal the Queen. Otherwise, enjoy the feeling of power as you defeat the Queen all by yourself.

Retrieved from "https://dragonage.fandom.com/wiki/Queen_of_the_Blackmarsh_(strategy)?oldid=862606"
Community content is available under CC-BY-SA unless otherwise noted.