watch 03:03
The Loop (Games)
Do you like this video?
“It is the Assembly who makes a king, and a king who nominates his successor. None of it is carried in the blood.”

Lord Pyral Harrowmont is the High-General of Orzammar, the leader of noble House Harrowmont which he represents it as a deshyr in the Assembly, and King Endrin Aeducan's second. A traditionalist, he is well known for being an able administrator and has authored many compromises in the ever-warring Assembly.

Harrowmont is one of the two candidates for the throne of Orzammar, the other being Prince Bhelen. The Warden must choose to support one of these candidates during A Paragon of Her Kind.

If the Warden says they will support him, the first task he gives the Warden is A Lord's Trust: The First Task, in which the Warden must fight in the Provings. After this, he asks for Jarvia to be eliminated. This can be done by completing Entering Jarvia's Hideout.

After that he tasks the Warden with finding Branka or what is left of her in order to assure his ascension to the throne, giving the Warden maps to Caridin's Cross in order to help the Warden in the search.

If the Warden joins forces with Bhelen, when he ascends to the throne, he will order Harrowmont executed. It can later be heard from criers, "News of the hour: Lord Harrowmont arrested, pending execution."

During the epilogue scene it is revealed that Harrowmont's reign is troubled.

If Branka was killed:
Bhelen's rebellion left Harrowmont unable to achieve stability and only measures to increase Orzammar's isolation and restrict trade with the surface were successful.

If Branka is alive:
Harrowmont manages to quickly put down Bhelen's rebellion and and then passes a series of laws to please the nobility isolating Orzammar and restricting trade with the surface. In addition the rights of the nobles and caste restrictions further increase. After some time King Harrowmont refuses to provide Branka with more dwarves to be used on the anvil and become golems. In response, Branka secretly raids the surface and kidnaps humans and elves which results in a brief war between Orzammar and Ferelden. The war ends with the great surface gates of Orzammar being sealed and further isolating the dwarven kingdom.

In all cases, if the Warden is of dwarven origin and requests as a boon from the monarch of Ferelden to send military assistance to Orzammar, the human armies find the gates closed as Harrowmont fears the disruption they might cause. Instead he allows only limited aid in the form of equipment and herbal medicines.

At some point the Assembly passes a law restricting the casteless from the Commons which creates a rebellion and results in the slums reduced practically to rubble. There is widespread outrage among the commonfolk but the noble Assembly remains united behind King Harrowmont.

During Wicked Eyes and Wicked Hearts the Inquisitor can overhear the discussion between three dwarven emissaries who gossip on news from Orzammar.

If Harrowmont was crowned King:
King Harrowmont has made considerable coin supplying Grand Duke Gaspard de Chalons' army with dwarven steel during the Orlesian Civil War. However, a shortage of food supplies leads to riots in the Diamond Quarter.

If the Warden survived the events of Origins and is of dwarven origin it is mentioned in dialogue that he declares the Warden, who became a Paragon, dead at the will of the Assembly for having gone missing. Furthermore, at some point between the end of the Fifth Blight and 9:41 Dragon Harrowmont builds a statue in honor of their new Paragon. If the Paragon is the Dwarf Noble, then the statue is smaller than expected prompting deshyrs to accuse King Harrowmont of cutting costs.

In the Frostback Basin the Inquisitor may uncover information about the Inquisition of old which will lead them to appeal to King Harrowmont for access in the Shaperate's records. The king will kindly decline the request but share a few Shaperate copies to Professor Kenric shedding some light on Orinna, a companion of Inquisitor Ameridan. 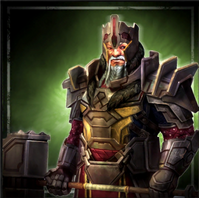 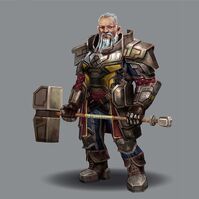 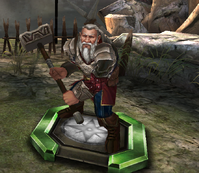 Lord Pyral Harrowmont as he appears in Heroes of Dragon Age 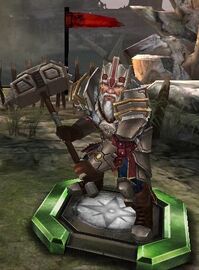 Retrieved from "https://dragonage.fandom.com/wiki/Pyral_Harrowmont?oldid=875078"
Community content is available under CC-BY-SA unless otherwise noted.