Duke Prosper de Montfort is an Orlesian noble belonging to the De Montfort family of Orlais.

Prosper is a high-ranking Orlesian nobleman, heir to the dynasty of Ser Gaston de Montfort, who rose to prominence during the Fourth Blight, most famously leading the cavalry at the Battle of Ayesleigh. He is a cousin of Empress Celene I's mother, Clarisse de Montfort, [1] and a close personal friend of Celene; he has a son, Cyril.

Prosper spends most of his time outside of Orlais on business or vacation, styling himself as a duke. He is known for throwing very extravagant parties, and regularly hosting wyvern hunts in his mountain estate in the western Free Marches, Chateau Haine, which his ancestor acquired after the Fourth Blight.

He also appears to be fluent in Qunlat.

Duke Prosper along with Lady Mantillon, assisted Celene in her plans to take the Imperial throne. Prosper was particularly moved by the assassination of his cousin, Clarisse de Montfort, who was Celene's mother. Prosper wept openly while promising Celene and her father, Prince Reynaud, any support he could offer. Prosper also apparently accompanied Prince Reynaud personally when he assassinated Lady Calienne, who was responsible for the murder of Clarisse. Later he was called away by Emperor Florian himself, seemingly as a means to deny Celene Prosper's support. Once their plans succeeded and Celene became Empress, Prosper remained her close ally.

According to Tallis, Prosper holds the "Heart of the Many," a gem which he supposedly has no right to possess. Tallis enlists Hawke's aid to infiltrate Prosper's home, the Château Haine, and steal the Heart of the Many.

Hawke and company arrive at the Château, having apparently accepted Prosper's previous invitation to the Champion of Kirkwall. After slaying a wyvern during a hunt, Prosper welcomes the Champion into his home. But as Hawke and Tallis infiltrate his vault, it is revealed that Prosper knew who the latter was the whole time and has the two imprisoned. As Tallis explains to Hawke, there never was a jewel. She was in fact pursuing a Tal-Vashoth named Salit, who was going to sell confidential information about the Qunari to Prosper.

After the two break out of their cell and if Hawke and company attempt to escape right through the Chateau, Prosper will bar their escape as he summons a brigade of chevaliers and harlequins to fight them and seals the Chateau. He then leaves the Chateau, ordering his Chasind bodyguard, Cahir, to deal with the interlopers.

Prosper then meets with Salit, expressing his regret for agreeing to spare Tallis and Hawke, and insists they conclude their exchange. Instead of the blackpowder formula, dreadnought plans, or a map of Qunanadar Prosper was expecting however, Salit gives Prosper a list of names, detailing the various Qunari agents in Thedas. Prosper fails to see the significance of the list and is angered by the seemingly useless offer. As he is confronted by Hawke, he unknowingly passes the list to a disguised Tallis. After all parties exchange words, Prosper fires a green substance at Salit that attracts the wyvern mount Leopold, who kills him. In the ensuing battle, Hawke manages to trip Leopold while Prosper is riding him in mid-charge, sending the wyvern over the cliff and Prosper clinging to the edge for dear life. He promises that Empress Celene will burn Kirkwall to the ground in revenge for his death. Regardless of Hawke's response, Prosper is sent falling to his death. However, his threats are futile, as it would become scandalous if it became public knowledge that he was dealing with Tal-Vashoth, possibly on the Empress' orders. 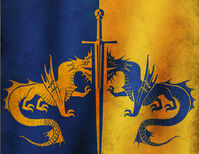