Promise of Destruction is a companion quest for Cassandra in Dragon Age: Inquisition.

Cassandra has reason to believe that Corypheus is behind the disappearance of the Seekers of Truth, but she requires help to prove it.

Available after talking to Cassandra in Skyhold after speaking to Hawke and the Grey Warden in Crestwood, assuming her approval is high/low enough. 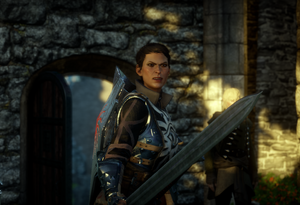 Complete the war table operation Locate the Missing Seekers. Speak to Cassandra, who will reveal she has tracked all the missing Seekers she could to one location: Caer Oswin, a fortress in Ferelden. The Inquisitor will then be able to select Party members, with Cassandra locked in.

After arriving at the outside path, head towards the castle - the path is quite straightforward. Enter the castle dungeon, where there will be some soldiers - apparently of The Order of Fiery Promise - waiting. Loot the dungeon key on one of the soldier corpses and continue forward.

After exiting the dungeon and a fight outside, loot the courtyard key. There is a cutscene, where Cassandra wonders how the Seekers could fell prey to Corypheus and the Order of Fiery Promise so easily.

Note: Make sure you have cleared the area before picking up the key: if there are enemies left, they might attack during the cutscene, and you will come back in control with several characters injured or dead.

After entering the castle, there are some more soldiers to fight. When heading upstairs, the party will find Daniel, one of the Seekers, who has been corrupted. Another cutscene occurs, where Daniel tells Cassandra that Lord Seeker Lucius is behind the disappearance of the Seekers as he has sold them to the Order of Fiery Promise. 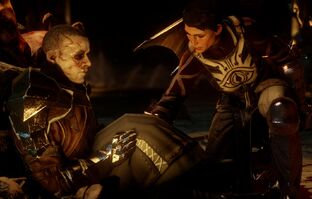 Find Lord Seeker Lucius outside the castle. He will explain his motives for the betrayal, and reveal some facts about the Seekers. Lucius also gives Cassandra a book of the Order's secrets. After the cutscene, the final fight occurs. Clear and loot everything before exiting the area.

Skyhold, at the acquisition of the quest

(Sighs.) I can keep staring at this, but I won't get any closer.

(other options have no approval change.)

I've a growing suspicion Corypheus has imprisoned them.

Skyhold, at the conclusion of the quest

And now it falls to me.
It should only be used on those who cannot control their abilities... but that has not always been the case.
But it appears we've always known how to reverse the rite. From the beginning.
I thought to rebuild the Seekers once victory was ours. Now I'm not certain it deserves to be rebuilt.

Seeker Shield - looted from a chest in the upper "Living Quarters".

Retrieved from "https://dragonage.fandom.com/wiki/Promise_of_Destruction?oldid=884154"
Community content is available under CC-BY-SA unless otherwise noted.