A phylactery is a vessel, often a glass vial, containing the essence of a magical being. The Circle of Magi and the Chantry use small phylacteries filled with blood—taken from an apprentice mage by the First Enchanter[1] or an Enchanter[2]—to track down mages that turn apostate.

In Kinloch Hold, the phylacteries of apprentice mages are kept in the basement of the tower behind protective wards, but those of full mages and enchanters are kept at an undisclosed location in Denerim. It seems that phylacteries are transferred off-site soon after a mage's Harrowing. Phylacteries of all First Enchanters were stored in the White Spire, an Orlesian Circle and the Templar Order stronghold. However, during the events of Dragon Age: Asunder the phylactery chambers of the White Spire were destroyed.

Phylacteries, ironically, are a form of blood magic.[3][4][5] When a templar wishes to track down a fugitive mage they will use the phylactery as a way of homing in on the fugitive by way of a "hot and cold" situation, i.e., the phylactery glows, becoming brighter the closer it gets to its respective mage.[6] If the mage dies, the phylactery will no longer glow.[7] It can be even used to remotely cast a spell on its owner mage.[8]

A rogue templar from the Gallows used a phylactery to track an escaped Qunari mage, a Saarebas, in a web series based on Dragon Age, Dragon Age: Redemption. The mage's phylactery was made into a necklace that works like a compass. It is implied that being in close proximity to one's phylactery weakens its owner, but it is unknown whether that is an error in writing of the series or some specialized property of this phylactery given the circumstances it was created in.

Mages who join the Grey Wardens are allowed to leave the Circle of Magi and are technically supposed to be exempt from Templar scrutiny, but as is in the case of Anders, Grey Warden phylacteries are kept by the Templars as possible means of insurance.

Codex entry: The Creation of a Phylactery 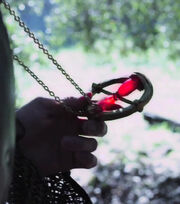