Oghren used to be one of the best warriors of his generation and member of House Kondrat in Orzammar. He married a smith caste girl named Branka, who would later become a Paragon. Soon after its founding, House Branka absorbed the entire House Kondrat. Branka later took her household, with the sole exception of her husband, into the Deep Roads in search of the secrets of the legendary smith Caridin. They were not heard from again. Oghren, left behind, became a laughingstock. He started drinking even more heavily than he already did, making his situation worse as one day the youngest son of Lord Meino mentioned that it is impossible for Branka and her house to have survived for that long in the Deep Roads. Oghren considered this as an insult to the Paragon, challenged his honor, and killed him in a first-blood match while drunk. Oghren was stripped of his house name and barred from bearing weapons within the city, a punishment considered worse than exile for a warrior. Oghren has spent the last two years trying to convince the Assembly, or anyone else who will listen to him, to look for Branka in the Deep Roads.[1] Oghren also knows Gorim Saelac, the second of the Dwarf Noble, because the latter has thrown Oghren out of the royal palace a couple of times. Their relationship is not bitter; however, there is some antagonizing.[2]

After the Warden has spoken to either Bhelen or Harrowmont's representatives and given a task, Oghren appears, arguing with Loilinar Ivo in the entrance of the Diamond Quarter. Loilinar can be questioned about Oghren and Branka after Oghren leaves. He can be found again at Tapster's Tavern in the Orzammar Commons. The Warden can talk to him there, and learn more about Branka. However, he is aware that the Warden is working for one of the candidates for the throne, which makes him think that any concern expressed about Branka is not genuine. If the Warden attempts to talk to Oghren at Tapster's again, no matter how the conversation is structured, Oghren will tell the Warden to "sod off".

He is eager to reunite with his wife, but when the truth is revealed, he is shocked at what she has done in her quest for the Anvil of the Void, including causing the death of most of her House. Yet, despite this he is willing to offer her a second chance, and he disapproves if the Warden chooses to side with Caridin and destroy the Anvil. After a new king has been chosen, Oghren then throws his lot in with that of the Warden's and leaves Orzammar to help fight the Blight.

After the archdemon was defeated, Oghren settled down with his old flame Felsi and had a child. This happens even if Oghren's attempts to woo her while accompanying the Warden were unsuccessful. Those who know him say that he was truly happy, at least for a time. But Oghren is a warrior born and bred, and, as he is fond of saying, "you can take a warrior out of the fight, but you can never take the fight out of the warrior". Oghren traveled to Vigil's Keep awaiting the Warden-Commander so he could join the Grey Wardens and helped defend the Keep when it was attacked by the Darkspawn. Should he be put through the Joining he will survive and become a fully fledged Grey Warden. Eventually Felsi will return and ask about what he intends to do with his family. Once his approval is high enough, he will talk to the Warden-Commander about his feelings and he can be persuaded to take a more active role or not. 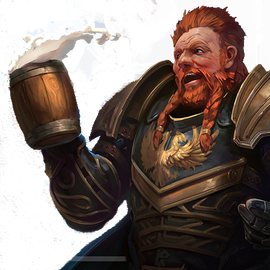 Retrieved from "https://dragonage.fandom.com/wiki/Oghren?oldid=692628"
Community content is available under CC-BY-SA unless otherwise noted.