“I once served a human some nug and he proclaimed that it was like eating an unholy union of pork and hare.”―Bragan Tolban[1]

Nugs are animals that populate the underground locations of Thedas. They are small, hairless, nearly blind creatures with pointed snouts for digging.[2]

They are harmless and docile omnivores which are known to eat almost anything they find on the cavern floors, including insects, worms, and when the pickings are lean, limestone and simple metals. Because of their frequent diggings in shallow pools and mud pits, the dwarves gave them the nickname of "mud splashers". Nugs can also be found in Orzammar as domesticated pets.[2]

Nugs also provide an ample supply of food for the dwarves. Nugs are such an integral part of the dwarven diet that Varen, a former Legionnaire, became a Paragon after he discovered that nugs were edible.[3] They can be prepared in a variety of ways such as nug pancakes and nug-gets.[3] King Ansgar Aeducan adored nug-seared on a hot metal plate and finished in the oven—and dressed in a cream sauce flavoured with deep mushrooms.[3]

They are described as being poorly adapted for any non-temperate environments and serving as prey to many different creatures, but still somehow managing to proliferate.[4] A feature of nugs often treated as "creepy" is the fact that all their limbs end in appendages very similar to hands. This characteristic is also present in their larger relatives.

A popular sport among the lower castes is nug racing. Special nug breeders ensure that nugs get big enough without much fat on them. Then before the race, special tunnels are prepared so that the viewers can watch the nug racing from above. Starved for a day, the usually sluggish nugs will start running once they smell roasted roof beetles. The nugs are also painted with House emblems. While most nobles will prefer to go and watch the much more respected Provings some attend the races which brings money to the sport. Naturally the casteless are also involved since successful breeders can earn a decent living. After nugs can no longer race, they are consumed as food.[5]

The Warden encounters nugs in the Commons, and may chase after lost ones to help out the Nug Wrangler Boermor. Additionally, a cute nug can be procured from the Idle Dwarf in Dust Town, which can be gifted to Leliana. She will then name it Schmooples.

If the Warden has sided with the werewolves during the Nature of the Beast quest line, one of the lost nugs from Orzammar may be offered to Emissary Bulfa in the Party Camp as a snack.

If the Warden asks Sanga, proprietor of The Pearl, to "surprise me", they may wake up next to two nugs, and then fall down shortly after.

Nugs are passive creatures and can be found in multiple locations across Thedas. Their hides can be used in various types crafting.

During the Inquisitor's descent into the depths of the Deep Roads, they find poems attributed to Paragon Ebryan about the Nug King. The Inquisitor can then travel to a secluded cavern where hordes of nugs are traveling to by undergoing a leap of faith. The Inquisitor then meets the Nug King after gifting it with a wheel of cheese. The Nug King comically judges the Inquisitor with regal squeaks while a tribe of nugs look on.

The Nug King (unmarked side quest) 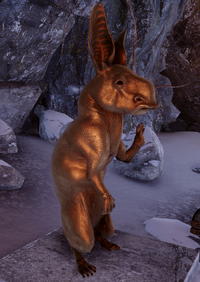 Codex entry: In Praise of the Humble Nug

On the Condition of Your Charges

Gauntlets of the Nug 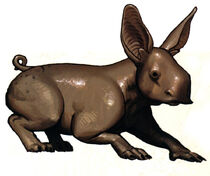 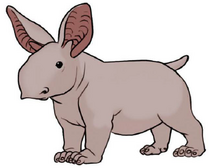 Nug in World of Thedas Vol 2 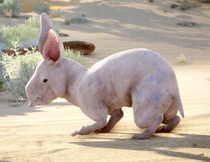 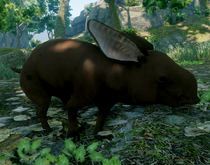 A brown variation encountered across the Emerald Graves 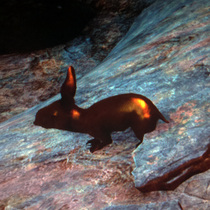 A metallic bronze/brass/golden nug running around in the Deep Roads in Dragon Age: Inquisition 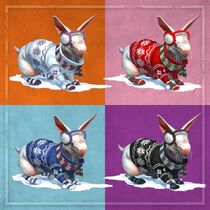 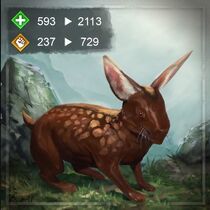 Artwork of the Chocolate Nug in Heroes of Dragon Age 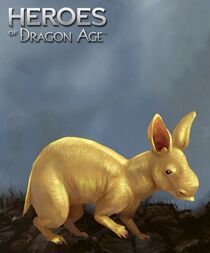 The Golden Nug in Heroes of Dragon Age 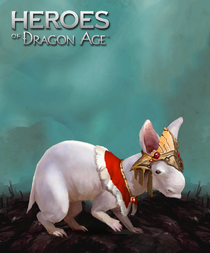 Artwork of the Nug King in Heroes of Dragon Age 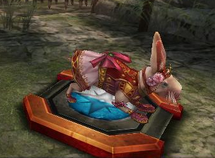 Tier IV of "Fluffy" in Heroes of Dragon Age 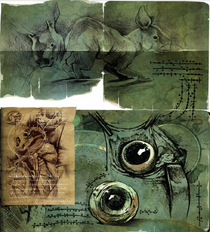 Grim Anatomy, dissection of a nug