Notice of Termination is a quest received from The Mages' Collective Quest Board at Lake Calenhad Docks. A member of the Collective would like someone to deliver letters to each of his three apprentices.

The locations are as follows:

Frostback Mountain Pass - Starrick the Apprentice, standing by Ahren the dwarf; to the left of the large stone circle.

Starrick's response: Such diction. This man is a true scholar and rhetorician! I am honored to be fired by one such as he! Good day!

Denerim Market District - Fayd the Apprentice, in the central bazaar, near Liselle on the other side from Cesar.

Fayd's response: Ugh. I knew this would happen. Just when I was starting to get good. Well, thanks, I guess.

Wonders of Thedas - Located in the Denerim Market District. Inside talk to Sheth the Apprentice.

Sheth's response: I knew it! I gave that man the best seven weeks of my life! Well, I guess he won't have me to push around anymore! Ha! 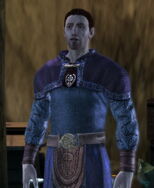 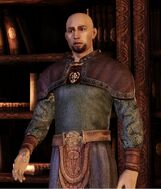 Sheth the Apprentice
Add a photo to this gallery
Retrieved from "https://dragonage.fandom.com/wiki/Notice_of_Termination?oldid=770354"
Community content is available under CC-BY-SA unless otherwise noted.