There are three Research Notes that can be obtained that document the experiments of a Tevinter researcher named Helladius[1] and his thoughts about a colleague named Sarpedon. The notes can be found in the Western Approach's Still Ruins; the first is found in the southwestern hall of Viridis Walk, the other two are located in the southeastern chamber.

Theoretically, it should be possible to draw energy from the Fade itself. While I will not discount the obvious dangers, such risks can be circumvented through use of a proper channel. Once the channel is stable, we should be able to manipulate the energy to our will. The power gained would be beyond measure.

At this time, theory will take us no further. If my hypothesis proves true, it will be an achievement unrivalled by any in history that will all but ensure the immortality of the Imperium.

A series of disturbing diagrams is followed by a personal note:

Sarpedon would cast doubt on our work here. I expected no less; he is Baloren's man. If he thinks to deter me, he will not succeed. Who accomplished anything through such fretting and hesitance?

Let him be placated by his pointless precautions. If he wishes to question the validity of my theories, perhaps he should look more closely at his own.

Blood to start, then from the channel itself. The slave-trader had six strong enough for the task.

Preparations are in place.

Sarpedon will call one final meeting. I must speak to the others in advance. 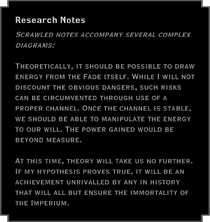 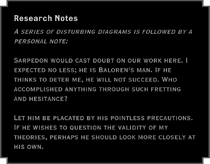 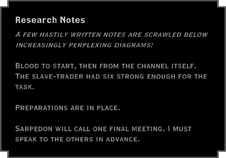 Retrieved from "https://dragonage.fandom.com/wiki/Note:_Research_Notes?oldid=891490"
Community content is available under CC-BY-SA unless otherwise noted.