An apostate's message was carved with veilfire into a remote tunnel's wall inside the Spiral Mine at the Forbidden Oasis, in Dragon Age: Inquisition.

The short tunnel is located on the same level as the Spiral Mine landmark, roughly north of it, and the carving is only revealed when carrying a veilfire torch. Several of these can be found on the way, either by entering from Elizabeth's Garden east of the landmark and following the tunnels and ladders up, or by taking the entrance at the southern end of the Envers Mining Camp.

The markings are crude and simplistic, but their meaning can be understood:

"They did not ask questions and so I was away. I keep my head low and work like the rest. The circle will not hunt this far. At first I regretted the choice, but they all feel the dread at the door. I do not stand out. Only a brother or sister would know these words. If you found your way here as I have, then you are not alone. If you would have allies when this contract ends, then find me."

For a moment, the pounding of footsteps can be heard, as if someone is running. Then it fades. 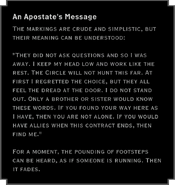 Retrieved from "https://dragonage.fandom.com/wiki/Note:_An_Apostate%27s_Message?oldid=797141"
Community content is available under CC-BY-SA unless otherwise noted.