The Northern Hunter is one of eleven high dragons encountered in Dragon Age: Inquisition. She is found lying asleep in an inaccessible location south of the dam in Crestwood. The draining of the lake during the side quest Still Waters will wake her and she will proceed to take residence in the ruins around the Fereldan Wyvern Statues landmark due south of the Village of Crestwood, Caer Bronach and the – fittingly named – Wyvern's Watch landmark, in the Black Fens region.

Even when compared to other High Dragons, Northern Hunters are voracious eaters, who eat everything from nugs to wyverns to human foodstocks, like vegetables and cheese.[1]

You must drain Crestwood's lake in order to fight the Northern Hunter. Draining the lake occurs as part of the Still Waters quest chain.

Out of all the high dragons in Dragon Age: Inquisition, the Northern Hunter is arguably the easiest to kill. She is relatively low level, does not summon allies, does not fly off in the middle of battle and does not generate a guard bar, which makes this fight relatively simple.

Your party should consist of one warrior and three ranged attackers. Mages should have fire or ice staves with spirit runes, if possible, and all party members should ideally have equipment that grants electricity resistance.

Like all high dragons, the Northern Hunter uses tail, claws and bite melee attacks. She also uses the following attacks:

If you keep your party spread out and heal as necessary, this battle should be fairly straightforward. If you are having difficulty, consider equipping Electrical Resistance Tonic, Regeneration Potion and/or Healing Mist on your party members.

The Northern Hunter can be slowly shot to death by a mage from the rock outcroppings to the north of where she is found, near and above the cave entrance. This strategy works because she will not leave the area around the front of the ruin and mage staves have an effectively unlimited range.

Once the Northern Hunter leaves her perch on the top of the ruin, she will land somewhat to the north of it. Skirt the entire area and head for Lawspeaker's Assembly. From there, work along the ridge to the back of the ruin. There is a rock outcropping just west of the ruin. Order all of the party members to hold and from this outcropping a single mage or archer can cheese her to death. Simply keep firing in normal (not tactical) view using either archery or a staff that is not electrical in damage type and she will not advance or attack the party in any way.

The ruins the dragon occupies 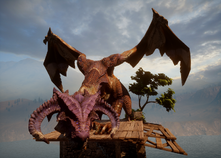 The dragon atop a ruin 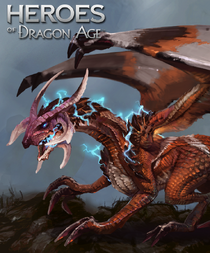 Artwork of the Northern Hunter in Heroes of Dragon Age