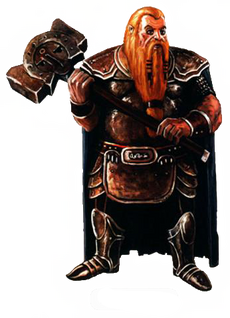 The Noble caste is the most privileged and elite caste of dwarven society, encompassing numerous noble houses as well as the royal house.

The Noble caste is composed of numerous houses. Noble houses are collections of noble families typically related by blood.[2] Most noble houses were initially founded by a Paragon but some were founded by high caste dwarves not originally of noble stock, typically warrior caste or smith caste. Noble houses used to rule thaigs all across Thedas which were their ancestral homes and typically gave their name to the thaig. However almost all of them have now been lost to the darkspawn.

The respect accorded to a noble house is proportional to its age and accomplishments. Sometimes impoverished noble houses will marry a child to a wealthy non-noble house to gain its wealth and to elevate the lesser house.[2] Noble houses or important nobles alone often act as patrons to lesser houses or families as well as function as patrons to great warriors in Provings and artists of merit. The noble house gains honor as the subject of their patronage excels and achieves greater status, so the relationship is mutually beneficial.

In combat, noble dwarves sometimes fight paired with another dwarf known as their "second". It is not known if other castes can have seconds. This form of team combat is a tradition in dwarven society as history has it that the style originated from the earliest days of the dwarven empire, when Kiotshett fought as King Bloadlikk's second.[3] Seconds may also function as something of a personal bodyguard and companion, essentially being the right hand of the noble.[4] If a second is not available to serve their superior, another dwarf may temporarily take his place.[5]

The known dwarves who served as seconds are the following:

The Royal family is the very pinnacle of the Noble caste, setting the mode in society and enjoying immense privilege and power amongst not only their own caste but all of Orzammar itself. The king or queen hold their position for life, as do the Assembly members, unless they are removed or replaced.[7] As the ruler, the monarch is the theoretical war-leader of Orzammar but in practice this means that the ruler merely commands the warrior houses sworn to his or her own house.[7] The monarch can expand their army by appointing High Generals from other noble houses and thereby gain their warriors.[8] The king or queen also has direct authority over the Legion of the Dead.

In modern-day Orzammar, royal power is kept in check by the Assembly, the dwarven governing body who chooses the king and from whom kings are typically drawn.[9] Although the king rules Orzammar he must garner the support of the Assembly lords to maintain his position, for kings can--and have been--expelled from the throne. Unpopular kings and their heirs are deemed unfit to rule and the kingship then passes to another. While the chosen ruler is typically male, women have also been chosen by the Assembly to rule.[10]

Lords and ladies of noble houses may have seats in the dwarven Assembly. During the events of the Fifth Blight, the Steward of the Assembly is Bandelor.

Members of the Assembly are known as "deshyr", which roughly translates to "assembly lord".[7] They are derisively called, "deep lords".[11] During the events of the Fifth Blight, the Assembly is composed of eighty deshyrs drawn from the most influential noble houses in the city. The right of a noble house to claim a vote in the Assembly is predicated on that house having a deshyr, general, or Paragon among their Ancestors.[12] Therefore, the number of Assembly members can fluctuate. Any caste other than the noble caste is not represented in the Assembly.[13]

To become a member there must first be an opening in the tightly closed ranks, and this usually occurs through death or resignation. An acting member then nominates a candidate who must be approved by one-third of the Assembly.[7] Resignation is uncommon as a deshyr holds their position for life, as does the monarch.

Noble houses are listed in an alphabetical order and those whose status is unknown have their name italicized.

Retrieved from "https://dragonage.fandom.com/wiki/Noble_caste?oldid=817334"
Community content is available under CC-BY-SA unless otherwise noted.