Capitalize on Alliance with Fairbanks or Manage Stolen Freeman Property

Noble Deeds, Noble Heart is a side quest in Dragon Age: Inquisition

Clara heard a rumor that Fairbanks is of noble descent. She believes it and wants proof to show the Council of Heralds. If Fairbanks gains power, she hopes he can do more for the people of the Dales.

Obtained by speaking with Clara in Watcher's Reach or Argon's Lodge after defeating Sister Costeau and freeing the captives in the Veridium Mine during the side quest A Fallen Sister.

Find three items proving Fairbanks' nobility. The items will be marked clearly on the map. Items #1 and #3 are behind a lock door that require a rogue to unlock it.

Once found you are instructed to present proof of Fairbanks' nobility to an interested party—either Fairbanks himself or Clara. Doing so will complete the quest.

Giving the proof to Clara results in:

Giving the proof to Fairbanks results in: 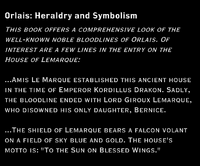 A book on Orlesian Heraldry

A painting of Lord Giroux Lemarque
Add a photo to this gallery
Retrieved from "https://dragonage.fandom.com/wiki/Noble_Deeds,_Noble_Heart?oldid=878984"
Community content is available under CC-BY-SA unless otherwise noted.