watch 02:39
The Loop (Games)
Do you like this video?
“I never thought I would say this, but I've learned much from traveling with you all.”

Neria is a player-controlled protagonist in Dragon Age: Inquisition's multiplayer.

Neria was born into the Ralaferin clan, and was chosen as Keeper Elindra's apprentice. Trained from youth to defend and serve people, she takes great pride in her magic and her role as Elindra's First. Now within the Inquisition as a Dalish emissary, Neria does all she can to see that the interests of the Dalish are not forgotten amidst the chaos.

Chosen to be the Keeper's First at the age of nine, Neria takes her charge very seriously. She's viewed by others as thoughtful and focused. Cillian, her clanmate, once said of her, "Once she puts her mind to something, it must be done. It will be done."

Several years after she was made First, Neria attended the Arlathvhen with Elindra. Neria learned here that some of the other clans bore disrespect towards the Ralaferin clan. They believed that Elindra's predecessor, Gisharel, had harmed the Dalish when he shared Dalish lore and culture with human scholars. Neria argued in defense of her clan, but her conviction wavered. Upon returning from Arlathvhen, she had a long discussion with Elindra about Gisharel's actions. The conversation reinforced her loyalty and pride to her clan, believing that humans would only learn to respect the Dalish by seeing and understanding them. She now serves as not only an emissary of the Dalish within the Inquisition, but of the Ralaferin clan and their beliefs on foreign interaction.[1]

During the main game, Neria is involved in various war table operations. Though she can't be spoken to, she can be seen walking around the garden at Skyhold. 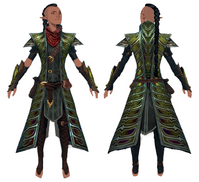 Neria in Heroes of Dragon Age 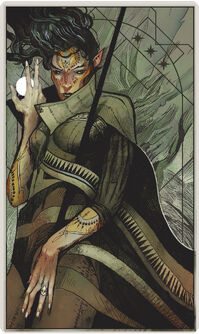 Retrieved from "https://dragonage.fandom.com/wiki/Neria?oldid=874465"
Community content is available under CC-BY-SA unless otherwise noted.