“My father often forgot that 'nobility' has another meaning.”

Nathaniel Howe (born 9:00 or 9:01 Dragon)[1] is the eldest son of Arl Rendon Howe of Amaranthine and a potential companion in Dragon Age: Origins - Awakening.

As the eldest son of Rendon Howe, Nathaniel was set to inherit the arling of Amaranthine. Nathaniel, however, had little interest in ruling, and would have preferred a life as a wandering knight over being Arl of Amarathine.[2]

When Nathaniel was young, he idolized his father and grew up hearing stories of his father's heroic exploits during the Fereldan Rebellion. He took great pride in his family's noble history, and spent many hours in the trophy room as a child, fantasizing about the day when he might be big enough to wear his great-uncle's armor, or strong enough to wield his father's swords. As the years passed, and the relationship between his parents worsened, the trophy room became Nathaniel's refuge—a place where he could escape from his miserable family-life.[3]

When Nathaniel was in his early 20's,[4] Rendon decided to send Nathaniel away to be trained in the arts of war. In a rare turn, Rendon actually agreed with his wife when she suggested Nathaniel be squired under Ser Rodolphe Varley, who was her cousin. A trained chevalier, Ser Rodolphe was often seen at the court of the ruling Vael family of Starkhaven.[5] Nathaniel argued vehemently against this decision, wishing to stay at his father's side like his younger brother, Thomas—whom Nathaniel suspected Rendon favored. His arguments were futile, however, and he spent the next 8 years in the Free Marches, serving under Ser Rodolphe.[2]

Ser Rodolphe was a harsh taskmaster with a serious demeanor, who had no tolerance for laziness or mischief. Nathaniel quickly learned that any jokes about his master must be said well out of earshot. Ser Rodolphe's manner caused this to be a dull time for Nathaniel, with little chance for levity or fun. Nathaniel's training as a squire consisted of daily drills, chores, and history and military lessons, which he found extremely boring. Despite Ser Rodolphe's great disapproval, Nathaniel also took up archery, learning the discipline from one of Ser Rodolphe's watchmen. Nathaniel found a much-needed reprieve in archery, and practiced daily.

Two years after becoming a squire, Nathaniel accompanied Ser Rodolphe to Tantervale to attend the Grand Tourney. It was an elaborate event that Nathaniel had only ever read about. The city was bedecked in blue and gold, and the finely dressed people danced and sang in the streets. Nathaniel joined in the grand melee at Ser Rodolphe's request, joining over a hundred warriors in battle against each other. Nathaniel did quite well, managing to beat several knights before being defeated. Though he was disappointed with his performance, Ser Rodolphe was greatly pleased and awarded Nathaniel with a purseful of gold. He promptly spent almost all of it on ales and cake, saving just enough money for a replica of Hessarian's Sword of Mercy and a tiny wind-up toy bronto that played music.

After accidentally wandering onto an archery field during a contest and almost being killed by a stray arrow, Nathaniel challenged the young elven woman who had fired the arrow to an archery contest and won. He would later say that his time at the Grand Tourney was one of the best times of his life.[6]

In the years that Nathaniel spent serving Ser Rodolphe, Nathaniel came to love the Free Marches and its people. Had it not been for the events of the Fifth Blight, he likely would have stayed there indefinitely. News of his father's murder at the hands of the Grey Wardens reached him in Kirkwall,[7] and although the details were vague, the story was clear: Grey Wardens had broken into the Howe family estate and slaughtered Rendon Howe for his treachery, and Vigil's Keep had been seized by the crown and granted to his father's murderers.[2]

Thus the Howe name was forever tainted by Rendon's involvement in the betrayal of King Cailan and the slaughter of almost the entire Cousland family. Nathaniel decided to leave his master, Ser Rodolphe, to spare him embarrassment. Swearing vengeance on the Grey Wardens, Nathaniel booked passage to Amaranthine.[8]

Upon returning to Ferelden, Nathaniel broke into his family's former seat of power, the fortress of Vigil's Keep which is now the Grey Wardens' main base in Ferelden. Returning to his old hideaway, the trophy room, Nathaniel had intended only to steal back a few family heirlooms, but he was discovered by the Orlesian Wardens who had come to rebuild the order's presence in Ferelden. Nathaniel was eventually captured, although it took four Wardens to subdue him and imprison him in the Keep's dungeon.

Nathaniel is first encountered by the Warden-Commander still locked in his cell after the Wardens regain control of the keep from invading darkspawn. The Warden-Commander then chooses Nathaniel's fate; Nathaniel may be executed, released, or conscripted into the Grey Wardens. If he is released Nathaniel will leave but later decides that if the Wardens spared him then perhaps the order is not what he thought. He subsequently tracks down the Warden-Commander as they return from their first mission away from Vigil's Keep and asks to be recruited.

Regardless of how he joins the Wardens, Nathaniel's Joining is successful and he becomes a fully fledged Grey Warden. If his approval is raised high enough, Nathaniel will eventually reveal his family already has some history with the Wardens as one of his ancestors, Padric Howe joined the Grey Wardens in the past.

Nathaniel will later encounter his family's former Groundskeeper still working at Vigil's Keep, who will inform him that his sister, Delilah, survived the Blight and is living in the nearby City of Amaranthine. If the Warden-Commander reunites Nathaniel with his sibling, Delilah will affirm that the crimes their father was party to during the blight were his own doing and that he was the architect of their family's fall. With Delilah's testimony Nathaniel finally comes to accept his father's complicity.

If he is brought along to the Blackmarsh, he will reminisce about how as a child he once dreamed of coming to the Blackmarsh and setting things to right. The Warden-Commander may point out that this is in fact exactly what he is now doing.

Nathaniel's ending depends on various actions you take during the game.

If imported from an Awakening save where he survived the events, or if you chose either the "Martyr" or "Ruthless" saved profiles, Nathaniel is encountered in Dragon Age II.

Hawke encounters Nathaniel during the quest Finding Nathaniel, part of an expedition into the Deep Roads. He explains to Hawke, who was dispatched by Delilah to find him, that the Primeval Thaig is of great interest to the Wardens, being farther in the Deep Roads than anyone has ever been. However, the Wardens felt it too risky to contact either Hawke or Varric, so the Wardens contacted the latter's brother, Bartrand. If Anders is in the party, they will have additional dialogue with each other and even more if the imported playthrough contained an Awakening epilogue in which he was seemingly killed.

If Finding Nathaniel was completed, Nathaniel may later show up to assist Hawke in the final battle against Knight-Commander Meredith, no matter what side was chosen by the Champion.

It is easy to raise Nathaniel's approval, especially if you are playing a Human Noble Warden. Consoling him, telling him that it was not his fault that the Howe name was dishonored, and basically any conversation choice that is open-minded will ensure that his approval increases dramatically.

Nathaniel has a preference for practical items and artifacts pertaining to his family.

As you befriend Nathaniel and gain his approval, he will gain the following additional skills:

Below are the spots where you can initiate dialogue with Nathaniel. On the PC, it can be hard to find the correct spot to click; make sure to hit "tab" and rotate the camera if it's not letting you click on it. 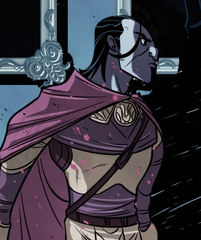 Nathaniel in the Penny Arcade comic 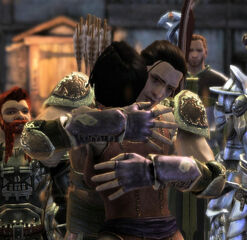 Reunion with his sister Delilah during The Howe Family 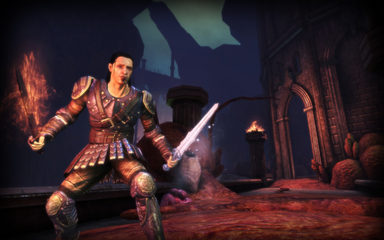 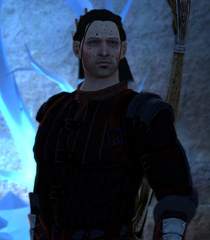 Tier progression of Nathaniel Howe in Heroes of Dragon Age 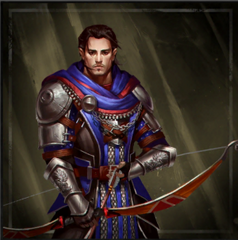 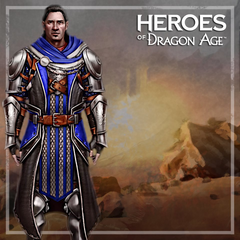 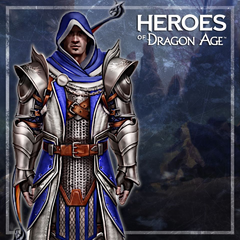