Edit
watch 03:01
Wiki Targeted (Games)
Do you like this video?
Play Sound
“Mythal, all-mother, protector of the People, watch over us, for the path we tread is perilous.
Save us from the darkness, as you did before, and we will sing your name to the heavens.[1]”
“Let fly your voice to Mythal. Deliverer of justice. Protector of sun and earth alike.
Pray to Mythal and she would smite your enemies, leaving them in agony.[2]”

Mythal the Protector, All-Mother, and goddess of love[3], is the patron of motherhood and justice (the flip side of vengeance)[4]. She leads the pantheon with her male counterpart, Elgar'nan.

It was at this moment that Mythal walked out of the sea of the Earth's tears and onto the land. She placed her hand on Elgar'nan's brow, and at her touch he grew calm and knew that his anger had led him astray.
—From Codex entry: Mythal: the Great Protector

The Dalish believe that Mythal was born of the sea.[5][6] They tell that when Elgar'nan threw the sun out of the sky in vengeance for burning the earth to ashes, Mythal calmed him and helped him see how his anger had betrayed him. Elgar'nan was convinced to free the sun. On the first night after the sun was released Mythal created the moon, from the glowing earth round its bed, to be placed in the sky as a pale reflection of the sun's true glory.[5][6]

In most legends, Mythal and Elgar'nan had at least four children, possibly five: Falon'Din, Dirthamen, Andruil, Sylaise and June.[7] However, June is oftentimes depicted as Sylaise’s husband, thus potentially excluding him from being considered one of the children.

In most stories, Mythal rights wrongs while exercising motherly kindness.[2] Other paint her as dark, vengeful.[5][2][8][9] Yet all accounts end the same: Mythal was exiled to the Beyond with other gods.[2]

This section contains spoilers for:
Trespasser.
Mythal was one of the Evanuris, powerful elvhen mages who often warred with each other, and branded their enslaved kin with their vallaslin.[10] Unlike the other pretender gods, she was a voice of reason and genuinely cared for her people.[11]
This section contains spoilers for:
Dragon Age: Inquisition.

Mythal was truly the Mother, protective and fierce.[12]

The ancient priests who toiled in Mythal's favor passed their knowledge on through the Well of Sorrows. Their collective will would put anyone who drank from it under a compulsion and bind them forever to Mythal's service.[13]

Elves petitioned Mythal on matters of justice and it is said that those who came to her with clear minds and open hearts were granted judgment and protection; Mythal harried their enemies until the end of their days. Those who tried to manipulate her wrath against those they envied or were being petty over imagined slights were swiftly struck down.[14]

Thus, Mythal did not show favor to the sinner who dared to fly in the shape of the divine. She let Elgar'nan judge him.[15]
This section contains spoilers for:
Trespasser.
On another occasion, when Falon'Din and Elgar'nan found themselves in an argument, Mythal defused the situation by suggesting that they appoint their knights to battle in their stead, thus avoiding a civil war among the gods.[16]
This section contains spoilers for:
Dragon Age: Inquisition.

When Falon'Din began wars to amass more worshipers, Mythal rallied the gods against him. Falon'Din only surrendered when they bloodied him in his own temple.[12]

When Andruil had gone mad after hunting in the Void, Mythal took the form of a great serpent and waited for Andruil at the base of a mountain. They fought for three days and nights, until Mythal sapped Andruil's strength with her magic and stole Andruil's knowledge of how to find the Void.[17]
This section contains spoilers for:
Trespasser.

Mythal has struck down the titans and rendered the earth, their demesne, unto the elves.[18] Her statues are found deep underground, often accompanied by statues of Fen'Harel.[19] One statue is overlooking an ancient dwarven tomb.[20] She is described as giving dreams to someone empty and thus filling them up.[21]

Mythal's Well of Sorrows knows the secret greeting from those Fen'Harel trusted, which suggests that Fen'Harel and Mythal were close.[22]

Mythal was reduced to a wisp of what she was, and came to Flemeth in her time of need. Thus the famed Witch of the Wilds, who is in fact the possessed form of Mythal, came to be. She seeks justice for what was lost.[23]

In the aftermath of Corypheus' defeat, Solas confronts Flemeth at an eluvian just as Flemeth is seen passing some form of energy through the mirror. After a brief exchange Solas/Fen'Harel appears to absorb Flemeth's power.

Mythal is often depicted as a dragon or a female humanoid figure with dragon head and wings. Some scholars have speculated that the constellation Silentir, which is depicted as either a dragon in flight or a man carrying a horn and wand, may have originally been a representation of Mythal.[25]

This section contains spoilers for:
Dragon Age: Inquisition.
Flemeth can turn into a high dragon. One of her daughters, Yavana, was tasked with watching over dragons sleeping in the Silent Grove, including the Great ones. After drinking from the Well of Sorrows and meeting Flemeth, the Inquisitor gains a dragon ally: either a shape-shifted Morrigan, if she drank from the well, or the Guardian of Mythal, subdued by the Inquisitor.

An altar to Mythal is found atop Sundermount, outside of Kirkwall. A majestic Temple of Mythal guarded by Sentinel elves is located deep in the Arbor Wilds. It was once the center of a temple complex with an entire city around it,[26] and there were multiple such cities.[27] Another Altar of Mythal stands nearby.

Codex entry: The Judgment of Mythal

An altar used to pray to Mythal on Sundermount, outside Kirkwall 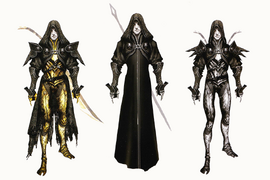 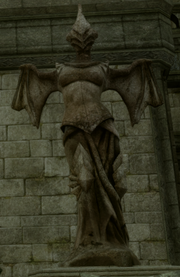 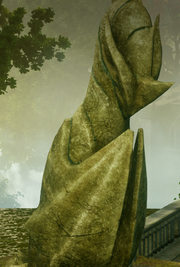 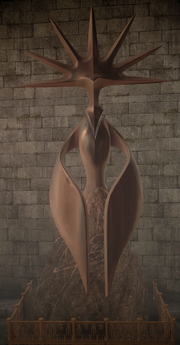 Statue found in The Crossroads during Trespasser 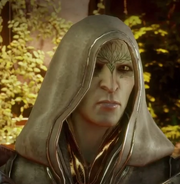 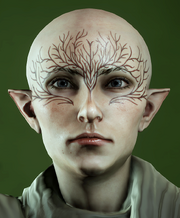 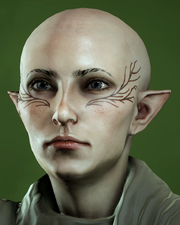