My Lover's Phylactery is a side quest in Dragon Age: Inquisition.

A phylactery found on a dead templar belongs to his mage lover, Ellendra. The phylactery could point other templars to Ellendra, and she may welcome its safe return, along with news of her lover.

Head southeast from the Dwarfson's Pass Inquisition Camp, climb up the nearby hill towards the totem to locate the nearby corpse. Loot the letter found on the dead Templar, which also grants a phylactery, and return it to Ellendra, the Templar's lover.

Codex entry: Phylacteries is also granted when the letter is looted. Ellendra's location in the Crossroads will be marked on the quest map. Giving her the phylactery will complete the quest.

Cole Approves whether he's in the party or not

Once the quest is completed, the Herald may have the option to recruit Ellendra into the Inquisition. The following options may be available:

Recruiting Ellendra as an agent for Josephine (Connections) yields:

A Letter Found on a Dead Templar (My Lover's Phylactery) 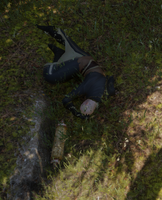 Retrieved from "https://dragonage.fandom.com/wiki/My_Lover%27s_Phylactery?oldid=879258"
Community content is available under CC-BY-SA unless otherwise noted.