Mugs in the Deep Roads

Mugs in the Deep Roads is a collection from The Descent DLC for Dragon Age: Inquisition.

It is true that Dwarves like their ale, and one can learn an awful lot about a Dwarf by the mug they carried.

The collection triggers upon the Inquisitor's discovery of any Dwarven Mug during the main quest The Descent.

In order to complete the collection 10 Dwarven mugs be salvaged while exploring the Deep Roads.

Located in the first room to the left after descending into the Darkspawn Warrens, the Mug is located just to the left of the Recovering Barreled Treasure expedition table operation.

Found in the hidden room connected to the room with the Builder's Towers desk puzzle in the Darkspawn Warrens, go down the stairway and destroy the crates with any desired ability; this exposes a doorway to a cavern, the Mug is found on the table to the right.

Obtained after unlocking the Heidrun Thaig Central Bridge, head to the end of the bridge and to the right in the Ruins of Heidrun Thaig (the operation does not need to be completed).

Located next to the seventh Gate of Segrummar in the Ruins of Heidrun Thaig.

Obtained after completing Heidrun Thaig Lower Bridge, climb down to the bottom, cross the wooden bridge, the Mug is directly ahead on the railing.

Located behind the fourth Gate of Segrummar, accessible after Heidrun Thaig Upper Bridge is completed.

Looted in the same room as the Arcane horror located in the far northeastern most area of the Bastion of the Pure. The Mug can be found to the right of the large diamond-shaped altar on a shelf among some candles, and to the left of the loot-able chest.

Looted next to a skeleton at the end of the bridge after completing the Deep Roads Expeditions: Buried Sea Bridge along with the Kingfisher's Staff.

Vessel of the Ancients[edit | edit source]

Located next to the third entry of Codex entry: Chronicles of a Forgotten War in the Bastion of the Pure.

Looted next to a skeleton after completing the Deep Roads Expeditions: Bastion of the Pure Excavation along with the fifth Codex entry: Chronicles of a Forgotten War. 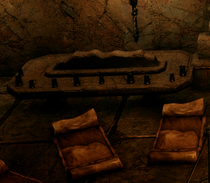 Table showing all ten mugs
Add a photo to this gallery

Retrieved from "https://dragonage.fandom.com/wiki/Mugs_in_the_Deep_Roads?oldid=882611"
Community content is available under CC-BY-SA unless otherwise noted.