Mounts are a mode of transportation available to the Inquisitor in Dragon Age: Inquisition.

There are different types of mounts and each type can take a different amount of melee hits before unsaddling you and disappearing, with horses taking one blow, harts taking two, dracolisks three, and nuggalopes four. [1] This is the only distinction among mounts; they otherwise have the same speed, turning radius and other characteristics. Some mounts are available only in the Digital Deluxe edition of the game. Companions don't have mounts and disappear while the Inquisitor is mounted. There is no party banter in this mode. The mounts can be changed next to the smith in Haven and by the stable in Skyhold.

Some mounts can be bought from the mounts merchant next to the stables at Skyhold. You need to first convince Master Dennet to come to Skyhold with you. Certain mounts may be synchronized across playthroughs using the Golden Nug. 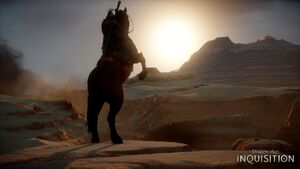 Retrieved from "https://dragonage.fandom.com/wiki/Mounts?oldid=867161"
Community content is available under CC-BY-SA unless otherwise noted.