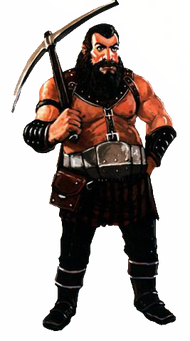 The Mining caste, also called as Miner caste[1][2], is the caste of dwarven society responsible for mining and excavating ore and minerals, the most valuable and precious of which is lyrium.

According to legend, the mining caste was founded by Orzammar, one of seven brothers. Orzammar dug the mines that became the foundations of the great thaig of Orzammar. From his descendants formed the Mining caste.[3]

Orzammar is the ancestral home of the Mining and Smith castes[4][5] and as such has had a strategic and financial importance to the empire. Part of the reason was to protect these commercial interests, that King Endrin Stonehammer in ancient times decreed the move of the capital from Kal-Sharok to Orzammar.[5][6]

Miners in the city of Orzammar enjoy a great deal of wealth and power. They are organized into the Miner's Guild which decides on how to distribute the extracted minerals.[7] Rich veins of ore lie in the Frostback Mountains and thus the miners are important to the livelihood of the dwarven people, and they make the most of this esteem.

Dwarves of the mining caste are able to find lyrium veins by ear[8] and some of them claim that they hear the Stone sing.[9] Miners are also the most proficient in the usage of explosives and grenades.[10][11]

Orzammar enjoys lucrative trade agreements with many surface organizations due to its control of the flow of lyrium to the surface and the mining caste is essential to this. The dwarves is the only known race which can mine lyrium safely and they tightly guard this secret.[12] They safely store lyrium within lead containers but further information on the exact specifications of these containers is also a secret.[13] The Chantry requires lyrium to enhance the anti-magical abilities of its Templars[14], the Circle of Magi requires lyrium to fuel its magic and to create runes, and the Tevinter Imperium requires enormous quantities to power its magocracy. This gives Orzammar immense influence on surface politics and trade negotiations and has facilitated a long-standing relationship between the dwarves and the Imperium, forged millennia ago by Paragons Garal and Stonehammer. In spite of this, smuggling can and does go on, as the Carta often sells illicit lyrium on the surface.

Mining houses are listed in an alphabetical order and those whose status is unknown have their name italicized.

A Crew of Ambassadors (Part V)

Codex entry: An Unsent Letter from a Miner

Retrieved from "https://dragonage.fandom.com/wiki/Mining_caste?oldid=862225"
Community content is available under CC-BY-SA unless otherwise noted.