Keeper Thelhen brought Clan Virnehn to a secluded section of the Dales for the purpose of summoning the choice spirit, Imshael, and trapping it in a binding circle. Thelhen tried to force the demon to awaken the ancient Eluvians to no avail, as Imshael believed that Thelhen needed to embrace the consequences of his actions.

Clan Virnehn later encounters Empress Celene Valmont I, Ser Michel de Chevin, Briala and Felassan, after rescuing them from an attack by sylvans, and then learn Celene and her entourage are looking to gain an alliance with the Dalish to fight against Grand Duke Gaspard de Chalons. However, Virnehn reacts by binding the humans, though Briala was later released as Felassan vouched for her behavior. Thelhen refuses an alliance with Celene, believing that the Dalish would end up betrayed like in the Exalted Marches on the Dales and was indifferent to the plight of the city elves. Suddenly, Michel is escorted back into the camp, as his guards were bewitched by Imshael to lure the human to it to try and make a deal. Thelhen and Mihris then return to the binding circle to reinforce the wards.

Ultimately, the outsiders decide that they couldn't wait for the Dalish to kill them or hand them over to Gaspard. Michel fought several Dalish warriors to free his empress before the clan warleader and Mihris confronted him. Though Mihris uses her magic against Michel, the warleader refuses her aid, but his overconfidence leads to his death. Held at Michel's mercy, Mihris reveals that he killed her lover back in the camp. When asked where his honour was, Michel spares her.

Imshael is soon released by Michel after his failed attempt to destroy the demon. The demon proceeds to annihilate Mihris' clan (except for the children)[1], but decides to spare Mihris herself, amused by Michel's decision. Mihris then allows herself to be possessed by Imshael in return for revenge on Ser Michel for the death of her clan. Mihris joins forces with Grand Duke Gaspard de Chalons as part of her plans for revenge. Mihris tells Gaspard that she can lead his group to Celene through the Eluvians. Mihris attempts to slay Michel when they first encounter Celene's entourage; however, she is disabled by Felassan's magic. Realizing that she would risk her death if she continued to attack Michel, Mihris bitterly acquiesces to Gaspard's demands that she hold to the temporary truce he has agreed with Celene while they travel through the Eluvian network.

Once at the central chamber, as Gaspard and Ser Michel duel for the fate of Orlais, Lienne de Montsimmard secretly hexes Michel to make him falter. While Lienne weakens Michel, Mihris uses her magic to dampen the area to conceal Lienne's interference and to prevent Felassan from using his magic to assist them for fear of further weakening The Veil. After Briala kills Lienne, she deduces that Mihris' magic has strengthened considerably since they first met and realizes that Imshael has possessed her. The demon is persuaded to leave Mihris' body after Felassan tells it that "something bigger is coming" to Thedas. Mihris then aids Briala, who had stolen the keystone required to awaken the Eluvians from Celene, by immobilizing the Empress, leaving her helpless as Briala claims the Eluvians for the city elves of Orlais.

After exiting the Eluvians, Mihris requests that Briala share the secret to the Eluvians with her. Briala responds that unless the Dalish agree to help the city elves, she will not share the secret. Mihris agrees to pass along the offer of help to any Dalish clan she encounters, and departs their company.

This section contains spoilers for:
Dragon Age: Inquisition.
Mihris can be found in the Hinterlands during Solas' quest Measuring the Veil, looking for an elven artifact in some ruins. After dispatching the demons inside and having activated the artifact, Mihris finds another artifact of great value. The Inquisitor can either attack her to claim the item, persuade her with a special dialogue option (either as an elven Inquisitor or with the Arcane Knowledge perk), or have Solas convince her to hand it over. 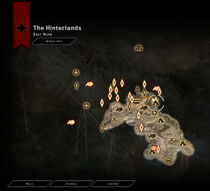 Position of Mihris in The Hinterlands
Community content is available under CC-BY-SA unless otherwise noted.
Advertisement