Edit
watch 01:54
Arcane: League of Legends - The Loop
Do you like this video?
Play Sound
“I haven't taken my Joining yet, but I look forward to fighting at your side.”

Ser Mhairi is a human warrior and a Grey Warden recruit. She is a companion in Dragon Age: Origins - Awakening.

Mhairi is a knight from Dragon's Peak.

When Mhairi was a child, she was enraptured by tales of kings and nobles. All she wanted was to be like them, to fight for what she believed. Betrothed to a trader when she turned sixteen, she saw the life that lay ahead of her and enlisted in the army instead. Her fierce loyalty and devotion to Ferelden earned her the love and respect of her commanders and brothers-in-arms and she was eventually knighted.[1]

Mhairi fought in the Battle of Ostagar. Loghain's betrayal of King Cailan and the King's death hit her hard, and when she learned of the two Grey Wardens who quelled the Blight almost single-handedly, she vowed to serve the Wardens. When the call came for volunteers to help rebuild the order in the Arling of Amaranthine, Mhairi jumped at the chance to join.

Mhairi was serving at Vigil's Keep under the Orlesian Grey Wardens who were assigned to Ferelden to help re-establish the order there. Oghren was present at the Vigil at the same time and Mhairi found herself irritated by his cavalier attitude. She was assigned to escort the new Warden-Commander back to Vigil's Keep. Upon returning to discover the fortress is under assault, Mhairi assists the Warden-Commander in clearing the Keep of darkspawn. If engaged in conversation, Mhairi will mention that she hasn't gone through her Joining yet.

During the defense of Vigil's Keep, Mhairi and the Warden-Commander encounter her friend, Rowland, a fellow knight from Denerim who is also a Warden-Recruit. Rowland has already been fatally wounded however and dies from the darkspawn taint. Mhairi swears to avenge his death.

The Warden can get an approval increase or decrease of +13 or -25 with her before the first Joining, without the use of gifts. The Warden only has to tell her that they will kill the darkspawn anyway and show concern for the wounded Rowland, or threaten to leave her behind and vote for an early death of Rowland. Her approval can be increased further using gifts imported with a character from Origins. Unlike other party members, her approval bonus for multiple gifts does not appear to decrease but high approval also does not give her any attribute bonus.

When you start a game in Awakening, she will be knocked out while your game is saving for the first time. pc

Artwork of Mhairi's tier progression in Heroes of Dragon Age 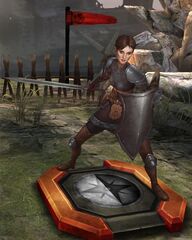 Mhairi in Heroes of Dragon Age