“Magic is a cancer in the heart of our land, just as it was in the time of Andraste. And like her, we are left with no choice but to purify it with fire and blood.”

Meredith Stannard is the Knight-Commander of the Templar Order in the city of Kirkwall.

An orphaned native of Kirkwall, Meredith rose in the ranks of the Templar Order and became an accomplished warrior. She became Knight-Captain in 9:14. She proposed several changes to the administration of the Gallows that resulted in greater efficiency and a more orderly schedule for the mages. Many of her fellow templars believed she had a hundred times the charisma of Knight-Commander Guylian and believed that she was the one who was the real leader of the templars despite her junior rank.[1]

By 9:20 Dragon the templars were the largest armed force in Kirkwall and could have challenged even the viscount for power. Knight-Commander Guylian would have preferred to stay neutral, but Divine Beatrix III pressured him to force Viscount Perrin Threnhold to re-open the Waking Sea passage to allow Orlesian ships through. As a result, in 9:21 the viscount attempted to oust the Templars from the city: he hired mercenaries to storm the Gallows and had the Knight-Commander hanged. In retaliation, Meredith and a group of her best templars marched on the Viscount's Keep determined to exact justice. The captain of the city guard quailed before the templars and to prove his own innocence, asserted that the viscount had acted unlawfully and had him arrested. Threnhold was thrown in his own dungeons, his lands and title stripped from him. Grand Cleric Elthina promoted her to leader of the Order, which she has governed with an iron fist. Viscount Marlowe Dumar was chosen at Meredith's strong suggestion. At his coronation, she gave him a carved ivory box containing Threnhold's bloody and broken signet ring with the words "His fate need not be yours" on the lid.[2] Dumar has never openly or strongly defied the templars since.

When Meredith was younger, her older sister Amelia developed magical talents but her family decided to shield her from the Chantry, knowing that she couldn't survive in the Circle or face their rigorous tests. The Stannards didn't have the knowledge or the skill to train Amelia as a mage, and the strange things that happened around the girl eventually brought their neighbors to call the templars. When Amelia saw the templars coming for her she was so scared that she made a deal with a demon and turned into an abomination, killing everyone in her family save for Meredith. The Templars eventually slew her sister, but not before the abomination had killed 70 more people. This experience led to Meredith's harsh view on magic, and why she thinks mages must be treated as people with a curse.

When the templar captain, Ser Wentworth Knell, returned to explain what had happened Meredith told him she wanted to go with him to become a templar. He took her to the Gallows, where Meredith was dedicated to the Chantry and became an initiate. He became her mentor and guardian, she would act as his page when not at lessons in the chantry. In 9:14, when Ser Wentworth's failing health made it impossible for him to fulfill his duties as Knight-Captain in he named Meredith as his successor and gave her his prized greatsword. He also said she was the daughter he never deserved. Over the next two years until he died, Meredith would visit him whenever she could even when he could no longer remember who she was.[3]

Meredith initially prevents most Fereldan refugees from entering Kirkwall, including the Hawke family and Aveline Vallen, forcing the refugees to prove they have legitimate business in the city by screening them at the Gallows. Meredith is first seen in person passing through Hightown, before Hawke's first conversation with Bartrand Tethras.

Meredith keeps a constant watch over the mages of the Circle, and strictly enforces the use of harsh measures to neutralize Apostate mages. Her reign over the mages has been considered by some as draconian and she would often employ the Rite of Tranquility as punishment for petty offenses, whether Harrowed or not.[4] Nevertheless, she denies Ser Alrik the use of his "Tranquil Solution" plan to turn all mages in Kirkwall into Tranquil. She is also the real political power in Kirkwall, as the current viscount fears to go against her wishes. Meredith is willing to neutralize anyone in order to root out corruption among the mages. She views the very existence of magic and mages as a threat to the general populace and thus sincerely believes her unremitting vigilance and harsh measures are necessary for the safety of all.

During the Qunari invasion of Kirkwall, Meredith saves Hawke and their companions from a Saarebas. Soon after, Meredith joins forces with both Hawke and First Enchanter Orsino in an attempt to retake the Viscount's Keep. If Hawke agrees with Meredith and launches a frontal assault on the Qunari outside the Keep's entrance, Meredith and several Templars will fight alongside Hawke personally. Once Hawke deals with the Arishok, Meredith appoints Hawke Champion of Kirkwall. She does so reluctantly, however, as Hawke's new influence in the city poses a potential threat and she initially views the foreign Hawke with disdain.

At some point after Hawke accompanied Bartrand and Varric into the Primeval Thaig in the Deep Roads, Meredith was able to obtain the lyrium idol which they had discovered. She had this reforged into a sword for herself. However, the side effects of the lyrium it was composed of caused her to go insane, just like Bartrand. This exacerbated her paranoia and prejudices against mages, and tensions between herself and First Enchanter Orsino rose over the three years following the death of Viscount Marlowe Dumar. She had Kirkwall placed under martial law and blocked every attempt to replace Dumar. According to Ser Karras, she went as far as to request the Right of Annulment from the Divine in Val Royeaux in advance.

After Anders destroys the Kirkwall Chantry in his attempt to spark an uprising among the mages, Meredith retaliates by invoking the Right of Annulment on the Circle, even though they were uninvolved (as Anders was an apostate mage who had never been a part of the Kirkwall Circle.) Hawke is forced choose to side with Meredith and the Templars or support Orsino and the Circle.

Meredith and Orsino meet again in the Gallows Courtyard. In a last ditch effort to save the Kirkwall Circle from annihilation, Orsino offers Meredith complete compliance to her wishes if she would only revoke the Right of Annulment. Meredith however, rationalized that the people of Kirkwall would demand retribution and she was determined to give it to them.

If Hawke agrees to aid the Templars, Meredith will rally the Order and Hawke's party in the Gallows Courtyard to lay siege to the Gallows and wipe out Orsino and the mages. Once Hawke and their companions breach the defenses, Meredith will fight with them against Orsino. If Bethany joined the Circle, Meredith will agree to spare her if Hawke insists. Meredith is more adamant that the other Circle mages who willingly surrender to the templars are executed. She argues that the Circle is irredeemable and that even if one blood mage survives the Annulment, it would pose a great threat to others. Knight-Captain Cullen will ignore her and orders the other templars to listen to Hawke if the Champion urges the templars to spare them.

Regardless of whether Hawke sides with the Circle or Templars, Meredith will turn on Hawke, accusing the Champion of plotting against her during the whole ordeal and orders the Champion to be executed. Her second-in-command, Knight-Captain Cullen, who was previously mostly supportive of her harsh measures, sees her insanity has taken her completely and orders her to step down.

This pushes Meredith over the edge and she accuses all of her Templars of being Blood Mage thralls. She then reveals the sword made of the lyrium idol found during the Champion's earlier trip to the Deep Roads. The sword grants her superhuman abilities and the capability of animating statues; nevertheless, the Champion and their companions are able to defeat her. In the midst of the battle, Meredith momentarily begins to question if what she was doing was right but her doubts are quickly washed away. As she refuses to admit defeat, her sword shatters and Meredith is petrified in lyrium.

Ironically, Meredith's attempts to enclose the mages became the catalyst for the rebellion of the other Circles in Thedas: seeing that the Templar Order could be defied and would even use the actions of an unaffiliated apostate to justify the annulment of an entire Circle, inspired mages everywhere to rebel. Cassandra comments that it was the Knight-Commander's actions which provoked the war, though Varric argues it could be said to be Meredith, the idol or Anders.
This section contains spoilers for:
Dragon Age: Inquisition.

Years after the Kirkwall incident Meredith's corpse is said to still be at the Gallows[5]. Because it's still contaminated with red lyrium, no one wants to go near it[6]. This reticence has seemingly allowed Meredith's petrified remains to be moved to a shelf in the Black Emporium[7].

The fragments of Meredith's Red lyrium greatsword, Certainty were recovered, the blade reforged and taken by Samson as his personal weapon.

If the Inquisition recruits the mages:
Later the blade passed into the hands of the Inquisitor and the re-established Inquisition.
This section contains spoilers for:
Trespasser.
The Kirkwall City Guard celebrated getting Meredith's body out of the Gallows by an impromptu parade. Several Lowtown residents composed a song on the spot with lyrics to the effect of "Thank the Maker the crazy cursed Templar is gone," which was remarkably catchy.[8]
This section contains spoilers for:
Dragon Age: Tevinter Nights.
Solas claims to have acquired the Lyrium Idol hidden within her transfigured corpse to further his plans.[9]

A Letter from Meredith

From the Desk of Knight-Commander Meredith 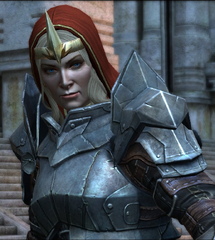 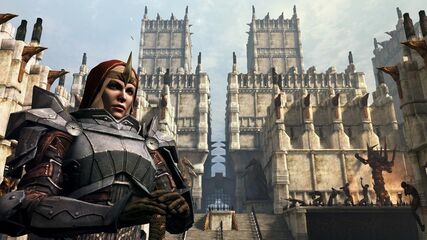 Meredith in the Gallows 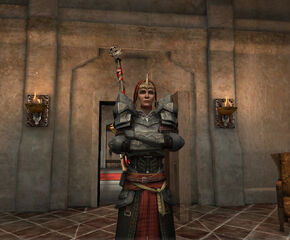 Meredith in her study 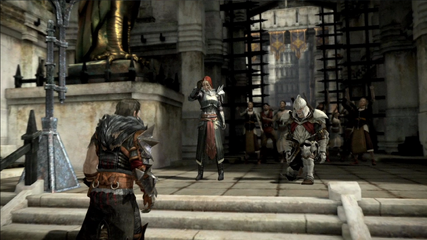 Meredith from the Rise to Power Trailer 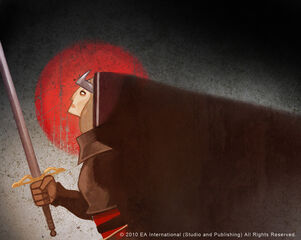 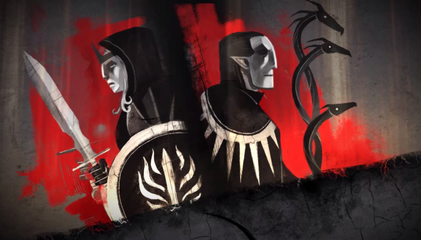 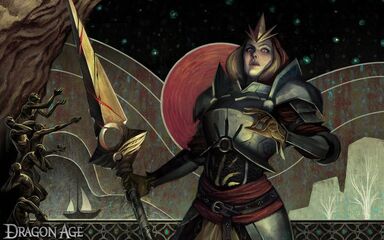 A painting of Meredith 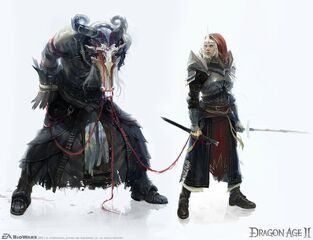 Concept art of Meredith with a Saarebas 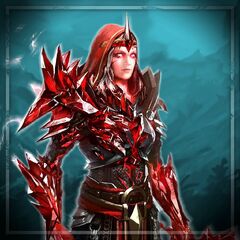 Tier progression of Knight-Commander Meredith in Heroes of Dragon Age