The Mask of Fen'Harel is an elven artifact capable of tearing the Veil into the Fade.

Fen'Harel is an ancient elven god of trickery, and is considered part of both the Creators and the Forgotten Ones. The Dread Wolf supposedly tricked the elven gods, good and evil, into leaving the elven people by sealing them away.

Keeper Yevven's clan was responsible for keeping the Mask of Fen'Harel secure. Only the Keeper knew what the artifact really was, and how to use it. When he was taken by the Chantry and imprisoned, he met a Tal-Vashoth mage whom he told about its existence. When the saarebas orchestrated an escape, he used magic to learn Yevven's secrets about the mask.

Once free, the saarebas travelled to Yevven's clan to acquire the artifact. Similarly to the Lights of Arlathan, the Mask required elven blood to work as it was meant to, and so the mage kidnapped a Dalish woman to use her blood in the ritual. The performed ritual made the mask complete, which Saarebas referred to as "the first step".

Saarebas then took the mask and the Dalish girl to an altar at Sundermount. There, Fina's blood filled the altar, rendering the ritual complete. A portal began to open in the sky.

But before the portal opened fully, Tallis threw a dagger into the mask, shattering it, effectively sealing the portal shut. 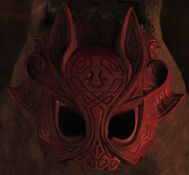 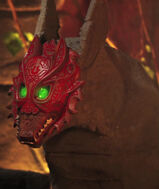 The complete mask placed on a Fen'Harel statue

The altar of Fen'Harel 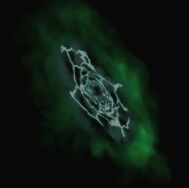 A portal to the Fade

The mask's explosion
Add a photo to this gallery
Retrieved from "https://dragonage.fandom.com/wiki/Mask_of_Fen%27Harel?oldid=885802"
Community content is available under CC-BY-SA unless otherwise noted.